A Comedy of Errors

This week I have managed to baste, machine quilt and bind my 49 squares RSC quilt.

Basting went well, the machine quilting went pretty well too. Thank you to the two ladies who suggested quilting ideas for me on last week’s blogpost. I am going to try your idea Jenny on the next smaller baby quilt I make for the hospital. I found a You Tube video that I think is doable for me. But I decided to go with Raewyn’s idea of going from corner to corner. But I just did that on the centre section of sashed 49 squares blocks, then sewed along the borders like I usually do. Pleased with the result.

Then the curtain was raised on the  Comedy of Errors as I began to sew on my binding, a job I’ve done hundreds of times. But for some reason I never stopped making mistakes: I didn’t notice (twice!) that the machine was looping because the thread had fallen off the screw that the cotton reel feeds around, two or three times I discovered I had completely gone wrong with the distance I was using for the seam line, etc etc. Finally got the binding on and I called it a day. My husband said I should just have stopped sewing near the beginning of this frustrating sewing session and I agree with him! Even more so the following day when I came to hand sew the binding because I had put it on the wrong side of the quilt. My group said don’t unpick it, just fold it to the front and stitch it down. I have, and it looks fine. I can only think I sewed it wrongly because both the outer border and the backing are the same fabric. That or old age!

Anyway, here it is: 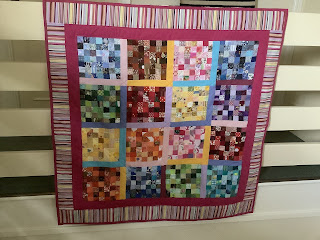 It measures 42” square and will be donated to the Linus Project when I have another couple of quilts to add. The lady who used to be the local distributor has retired and no one has taken over so I know I’ll have to look further afield for a distributor. A job for 2022 I think.

A few close ups of some of the blocks: 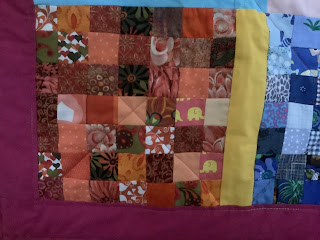 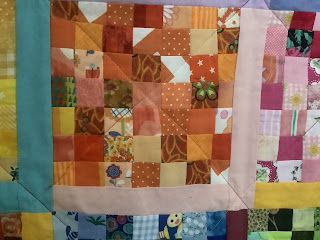 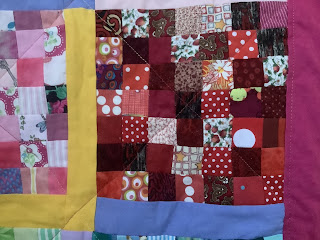 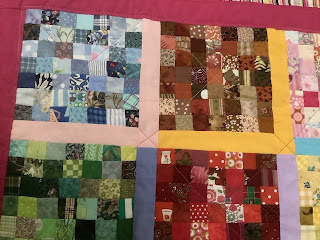 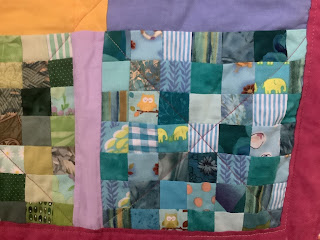 I finished another baby cardigan and two matching hats which I love! 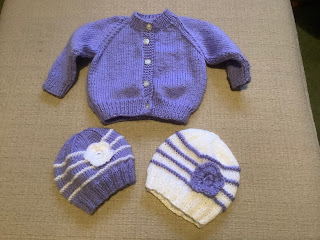 Linking up with Angela’s Soscrappy RSC blog.
Posted by Linda at 07:33