At the end of last year I made a Spiderweb cushion for one of my quilting friend's special birthday ( one of those ending in 0 ).

As a Group we had made Lynne a Spiderweb quilt, using the colours she loves and uses a lot in her house, Cream and Autumn shades.  It was a pattern I had wanted to do for a long time and was thrilled when another member of our Group suggested this as an idea for Lynne's quilt.  I worked out how much cream on cream fabric we would need for the centres of the blocks and there was enough for the binding too.  Then the whole Group brought strips of fabric in the Autumn colours we had chosen:  yellow, gold, orange, tan, brown, red, lime and various greens.  We had a real variety of fabrics, some old, some quite new but together they looked fabulous.  We chose a meeting when we knew Lynne was away and all picked lots of strips from the piles, making sure we had some in every colour.

As the Spiderweb block was an unknown one to many of the Group I made some sample blocks using white Kona cotton for the bases and pastels and brights for the strips.  I had fun making them up to various stages of production so I could demonstrate the method to the rest of the ladies.
In the UK we have a great children's TV programme called "Blue Peter" where presenters show the viewers how to make various art and craft items.  They always have a completed one to show the children what they are aiming for and always say: "This is one I made earlier". I felt rather like I was a presenter on Blue Peter and indeed, did have "one I had made earlier" as well as several blocks in various stages of completion.  I must have demonstrated it OK as everyone managed to complete their blocks ( without too much hassle I hope!).

As a Group we finished the Quilt and it was handed round to each member to do some of the hand quilting in cream Perle cotton, put on the binding, hand stitch it down and finally embellish with little red buttons in the spiderweb centres.  We all agreed that the red buttons "made" the quilt!

Unfortunately I was in New Zealand by the time it was Lynne's birthday on 11th February so couldn't see her face when she opened her gift.  However I have had several email reports from other Group members who said she was "stunned" and a lovely "Thank you" email from Lynne.

I left the cushion I had made to be gifted to Lynne when the quilt was given and I know she liked it from her email. 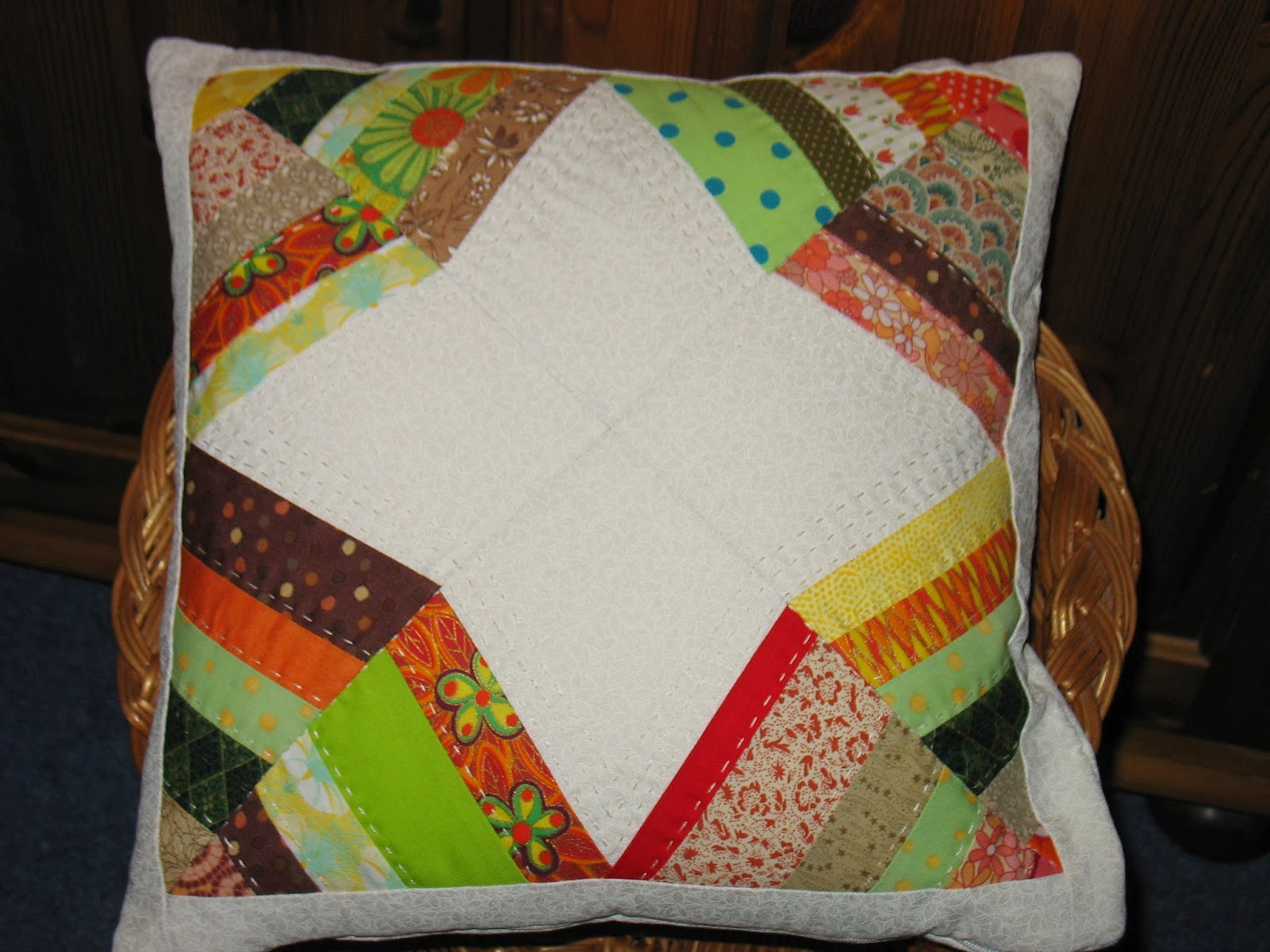 I was really pleased as this is the first time I have put a zip in a cushion and it turned out well.
The zip is at the bottom  of the cushion.
When I am back in the UK I will continue to make the Spiderweb cushion I began as a demonstration.  Should make a pretty quilt.
Posted by Linda at 16:05 No comments:

Please take a look at her post Soy Amado if you haven't already seen it.
Such a worthwhile project and I am sure it will be well received by the Quilting Community.  Quilters are always so generous with their time that I am sure Alison's project will be well supported and QAYG blocks will be flooding into her post box.

Here are 6 blocks I have made which I hope will be OK and help to make another quilt to keep a Mexican Street child warm. 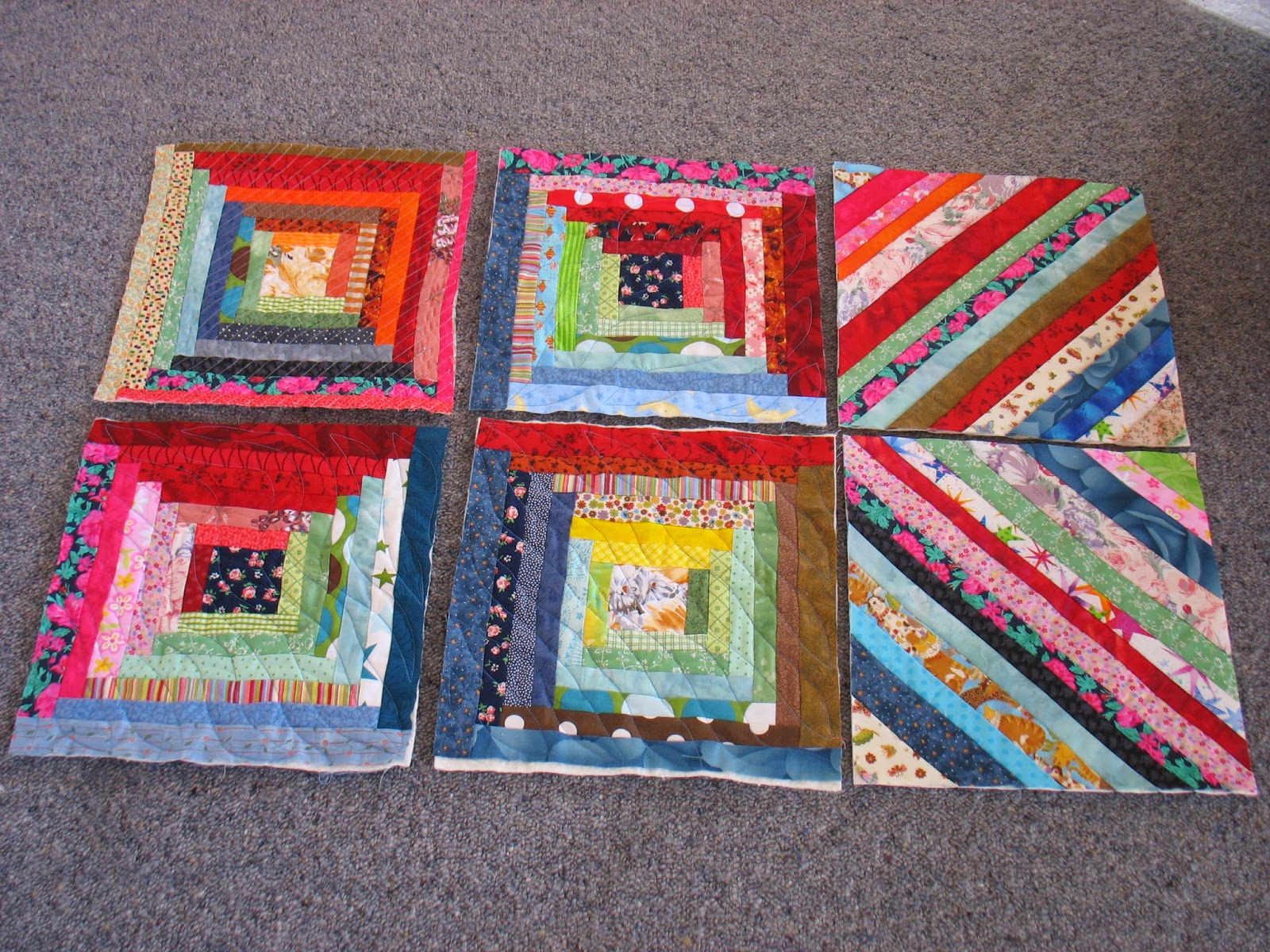 The quilts Alison has already made using her own and donated blocks are so cheerful and colourful they are bound to put a smile on the face of the child who receives one of these quilts.
We are still having gorgeous weather here on the South Island, New Zealand so this is all the sewing I have accomplished during this week.

Those quilters in the Northern Hemisphere are probably sewing away like crazy, trying to forget the rain, winds and snow outside.
Happy Sewing!
Posted by Linda at 20:14 3 comments:

Very quiet on the sewing front.  Enjoying the sunshine too much to sit indoors at the sewing machine.

But this evening I have completed my 4 year old granddaughter's Ballet cardigan.  I made her one in pink in January last year when she started Ballet classes.  But she has grown and needed a larger size.  Annalise decided that this time she wanted blue as their Ballet outfits are a royal blue.  This isn't quite the right shade but it was Annalise's choice.  We bought the yarn before Christmas and I brought it out to New Zealand with me to knit.

It seems to have taken a long time to make. I actually knitted all the main pieces whilst I was watching the Australian Tennis Open on TV but it has taken until today to complete the sewing up, knit the bands and ties.

But on Thursday it will be posted back to the UK.  Just hope it fits!

Maybe I will have some sewing to show in my next post!
Posted by Linda at 23:18 No comments:

What happened to January?

A good reason as I flew off to Hong Kong en route to New Zealand on New Year's Day.  Since then my DH and I have been having a lovely time reacquainting ourselves with our NZ house, neighbours and friends.  Almost no sewing has been done, a little knitting, and a lot of socializing and enjoying the sunny summery weather here.  Just what anyone in rain-swept Britain wants to hear. Sorry!

So no quilting photos to share but on Tuesday I may visit a Patchwork Shop and on Wednesday I will be going to my Quilting Group so a little sewing may be done.

I have been enjoying following Bonnie Hunter's Quiltville blog, watched a couple of her Quiltcams and feel fired up to try some of her Leaders and Enders Split9Patch blocks.  Before I can make a start I have to cut up some of the stash scraps I have here in NZ though. In the UK I already have a box of 2.5" squares, not here though.  But when it is sunny I will not be sitting indoors at the sewing machine but I could cut cut up a few scraps on the table on the back deck.