Do I have CSD? ( Compulsive Squares/Scraps Disorder)?

As is my habit, I was idly flicking through Flickr this morning and came upon this delightful quilt from wombatquilts

It's a fabulously bright Postage Stamp quilt made from 2" strips eventually creating 1.5" squares.  Well, of course I added it to my Favourites, looked at it intently, gazed at its largest sized picture using the "View all sizes" button, then used the facility on my iPad to enlarge sections so I could get an even better look!

This reminded me of a baby quilt I made some years ago using 2.5" squares, although mine were actually all squares and not strips, which I loved making as it appeals to my sense of using up scraps to make something new and pretty and functional. I called the quilt So many squares baby quilt and gifted it to baby Serena .  It was used as a cot quilt and then, when Serena graduated to a Big Girl's bed it was used as a bed quilt and looked really great!
This train of thought set me trawling through my Flickr photostream until I found the quilt and here it is:

I have obviously been smitten by the Small Squares bug ever since as I have drooled over Katy Jones' Scrap Vomit quilts which she based on an idea by Melanie which you can see if you follow this link:

Have a look at Katy's blog: imagingermonkey.blogspot.com and drool over the several Scrap Vomit quilts she has made.  All gorgeous and riots of colour.

I loved these quilts so much I have been gradually adding to my hoard of 2.5" squares by cutting a few from scraps left over from cutting fabric for other projects.  I have also added to them by taking part in 2 Swap bot swaps of Scrap Vomit squares.  It is a comfort to know there are lots of other people all over the world suffering from the same affliction!  Still not started sewing the quilt yet though!  Always too many other projects higher on the list.

Then a few years ago I saw another variation on the Small squares sewn together to make a quilt on Bonnie K Hunter's quiltville blog.
Another idea of making a Scrap Squares quilt but this time using strips which you turn into tubes and eventually make blocks of squares.  I stalked this idea for some time but didn't actually make that quilt either.  Then a few months ago up popped the idea again on Katy's blog and she started the Scrappy Strip Along craze that has been ( and still is!) raging on Flickr.  If you haven't got the bug yet, have a look at the Group's pictures on Flickr.  I have become so obsessed I have created 3 Scrappy Strip Along Galleries on my Flickr photostream and cut a load of 2.5" strips ready to start my quilt.

I have realised that I may have a problem...................... I can't resist small scraps of fabric, especially if they are magically turned into quilts made from hundreds of squares.  Perhaps I'm suffering from CSD?  Compulsive Squares/Scraps Disorder?!  Do let me know if you share the same problem - perhaps we could band together and form a Self-help group!

I've had a busy week, finishing one quilt, sandwiching a WIP quilt top and two little premature baby quilts ready for hand quilting and labelling a little quilt I made exactly one year ago. 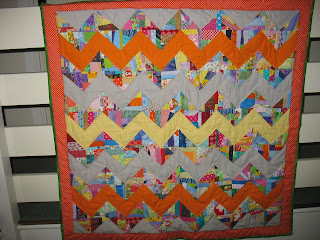 I am so pleased with this quilt, all made from stash, nothing new bought at all.
A few statistics:
Quilt measures 40", which I think is a nice size for a cot quilt/playmat.
I used 72 of my completed 4" Crumb blocks and paired those with 4" squares of yellow, orange and ash Kona Cottons to make the 144 HST units.
Borders cut at 2.5" from a bright orange polka dot fabric I also had in my stash ( just a small piece of that left now)
Bound in a marbled effect bright green fabric which was sent to me recently in one of the Swap bots I joined.  I had a fabulous parcel of scraps from Shevvy, several of which were very generous sized pieces, including this green one.  Again, I have a little left over.
Hand quilted with a variegated yellow and orange Perle cotton.  I just outlined the zigzags and quilted 1/4" inside the borders. 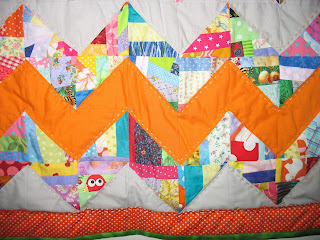 Exactly a year ago I made my first Freckles Quilt fron Emily Cier's Book Scrap Republic. I didn't have anyone in mind for the quilt and put it away with my pile of finished quilts. However, a good friend has recently become a grandmother again so I decided this pretty quilt would be an ideal gift for little Nisha.
I have embroidered a label ( I have called the quilt Rainbow Bubbles) and sewn it onto the quilt and it is now ready to be mailed.

Here's a reminder of the quilt: 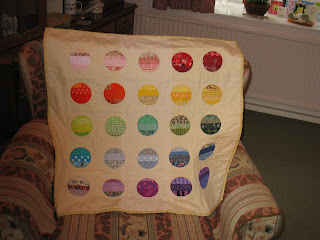 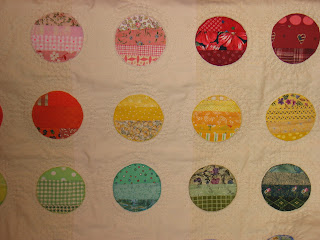 This Close up shows how the circles are constructed from strips of scraps joined together.  It's so effective, especially as the concentric lines of hand quilting make the circles pop out of the background fabric.  I shall have to make another of these quilts!  Again, the quilt was all made from scraps I had in my stash as I even pieced the background of this quilt.

There are three babies due in April and May, all grandchildren of New Zealand friends so I am making a few cot quilts to add to my little stash of finished cot quilts. My Zigzag Quilt was added this week and I also decided to turn a quilt top I made some months ago into a baby quilt.  It's orange, blue and lime green, featuring a lovely Owl fabric.  Simple squares and rectangles.  I managed to find enough pieces of fabric in my stash to stitch together for the backing and sandwiched the quilt a couple of days ago.  The batting is a pale green one made from recycled plastic bottles, a Cot sized piece I won in a Giveaway ages ago.
I even had enough of the batting left over to use for two Premature baby quilt tops that were also sitting in my WIP box. Last night I sandwiched those together, backing them with more of the vintage sheet I used as backing for my Siblings Together quilt.

So, all in keeping with my New Year Resolutions to finish WIPs and to use up my stash!

So, a productive week!  I can now enjoy looking after our little 3 year old granddaughter this weekend, all sewing put safely away, out of reach of little hands!

Pinch punch the First of the Month!

Yes, it's 1st February! I cannot believe how quickly January has passed, especially since we have had quite a lot of snow so I have been indoors more than usual. I really don't like the dark winter months and I am not a fan of snow either, so January and February are challenges for me.

However, I have done quite a lot of sewing, cutting out and participating in Swap bot swaps so perhaps that has helped dismal January along!

During the month I have made another I Spy Bubbles quilt and earlier this week I posted it to New Zealand, a gift for the new little grandson of special friends out there.  Another Elijah ( I made a quilt last year for our daughter's friend's baby, also named Elijah) so I hope he enjoys his bright quilt.

This week I also posted my Siblings Together quilt and today had confirmation that it had arrived safely in London.  Always a relief to know your hard work hasn't got lost in the post.  Today I also received a Thank you letter from Ava's parents as her Wise Owls quilt had arrived safely in Edinburgh.  Hurrah!

I have been busy putting my Zigzag Quilt together.  Almost finished the hand quilting with variegated Perle cotton and will soon be able to do the binding.

And I have participated in two swaps on Swap bot.  Both have now closed and the packets of swap fabrics are popping through my letter box.

The Scrap Vomit Squares Swap is the second of these swaps and I have taken part in both.  This time we had five partners and so far I have received swaps from three of them.  A great range of prints, colours, styles, etc which will be lovely when I eventually begin my quilt.  This is based on Katy's SV Quilt which you can read about on her blog Imagingermonkey.Imagingermonkey.blogspot.co.uk
I love this style of quilt, anything Scrappy is always a favourite with me!  I have been accumulating 2.5" squares in anticipation of making my own SV Quilt and the 2 Swap bots have added a different mix to my own squares.  Just need to finish a few more outstanding projects first.

The second Swap bot was called Shift Your Scraps Swap and this time we had just two partners.  One of mine lives in Wales so her parcel came a few days ago.. The requirements asked for a 200g Ziplock bag of scraps, 2.5" square and upwards. I was amazed and delighted when I opened Shevvy's parcel of fabric.  For a start there was so much that I felt I had to weigh it........ 335g!  This included some scraps, 20 x 5" squares, 4 LARGE pieces of fabric and so many 2.5" strips ( lots of them wof ) I think I could make lots of blocks for my other proposed quilt, the Scrappy Trip Along, also featured on Imagingermonkey.blogspot.co.uk although it was originally Bonnie Hunter's idea.
Thank you, Shevvy. Strangely enough Shevvy was one of my partners for the SV Swap so I hope she is happy with the squares I sent.  Think I ought to pop some more in the post to her! 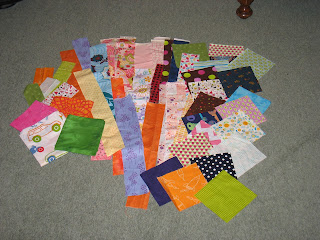 The fabulous pack of Scraps from Shevvy!


So, a satisfying January: 3 quilts posted and 2 already with their new owners.
1 quilt finished and 1 almost ready for binding
2 blocks made for a Group Quilt
2 swap bots completed
Lots of 2.5" strips cut ready for my Scrappy Trip along quilt

I hope you all had a busy January too.
Posted by Linda at 13:09 No comments: