If you read my blog you will know that I love Scrap Quilts: making them, gazing at pictures of them, looking at them in shows! I have quite a collection of Scrap Quilt books on my sewing room bookshelves and loads of patterns  in my ring binder file.

So I was delighted to find Deb from Works in Progress is not only making a Scrap Quilt ( Katie Jones Scrap Vomit one) but is encouraging quilters to make a scrap quilt or finish one they have already started. No doubt there are hundreds of UFOs hidden away in cupboards all over the world!

Have a look and get inspired and don't forget to add your quilt or block pictures to Deb's link.

I love Deb's quilts. She has a great eye for colour and design and all her work is so cheerful - I find myself smiling when I see her quilts.

So, this has spurred me on to start making some blocks for a Wonky Wishes quilt, a free pattern by Bonnie Hunter on her Quiltville blog.  Earlier this year I make four of these blocks which I  did QAYG style for the Soy Amado project.  I loved making them and was very pleased with the result  and would love to make a whole quilt. I have a lot of 2.5" squares already cut but I will need to cut a lot of neutrals for the star centres.  So this week I  intend to look though my stash for neutral scraps and cut out as many 2.5" squares as I can and put some scraps to be used for the star points into a ziplock bag so I have everything ready to make the blocks. My intention is to make it alongside another baby quilt I hope to start very soon.


I am hoping that by writing a post about my intentions I  will actually start to do it.

Happy Scrappy Sewing to you all!


#scrappyquilt#quiltalong
Posted by Linda at 01:16 No comments:

Email ThisBlogThis!Share to TwitterShare to FacebookShare to Pinterest
Posted by Linda at 01:12 No comments:

Email ThisBlogThis!Share to TwitterShare to FacebookShare to Pinterest
Posted by Linda at 01:09 No comments:

About a month ago I was amazed to learn from Rita of Red Pepper Quilts that I had won one of her Giveaways!.  I nearly always enter the Giveaways Rita hosts as they are always fabulous - either bundles of very desirable fabrics or vouchers. I was fortunate enough to win a $50 US voucher from Poppyseeds Fabrics.

I then spent a happy time trawling through lists of fabrics and trying to maximize the amount of fabric I could buy for $50.  I was paying for the postage from the USA to the UK so wanted to buy fabric that would completely fill the mail envelope.  It took a few emails back and forth because several times other customers had chosen the fabrics I had requested and I had to choose again.  However I spent my money, adding just a little bit extra of my own and then waited for the parcel to arrive.  It came really quickly - mailed last Friday and received yesterday, Tuesday. 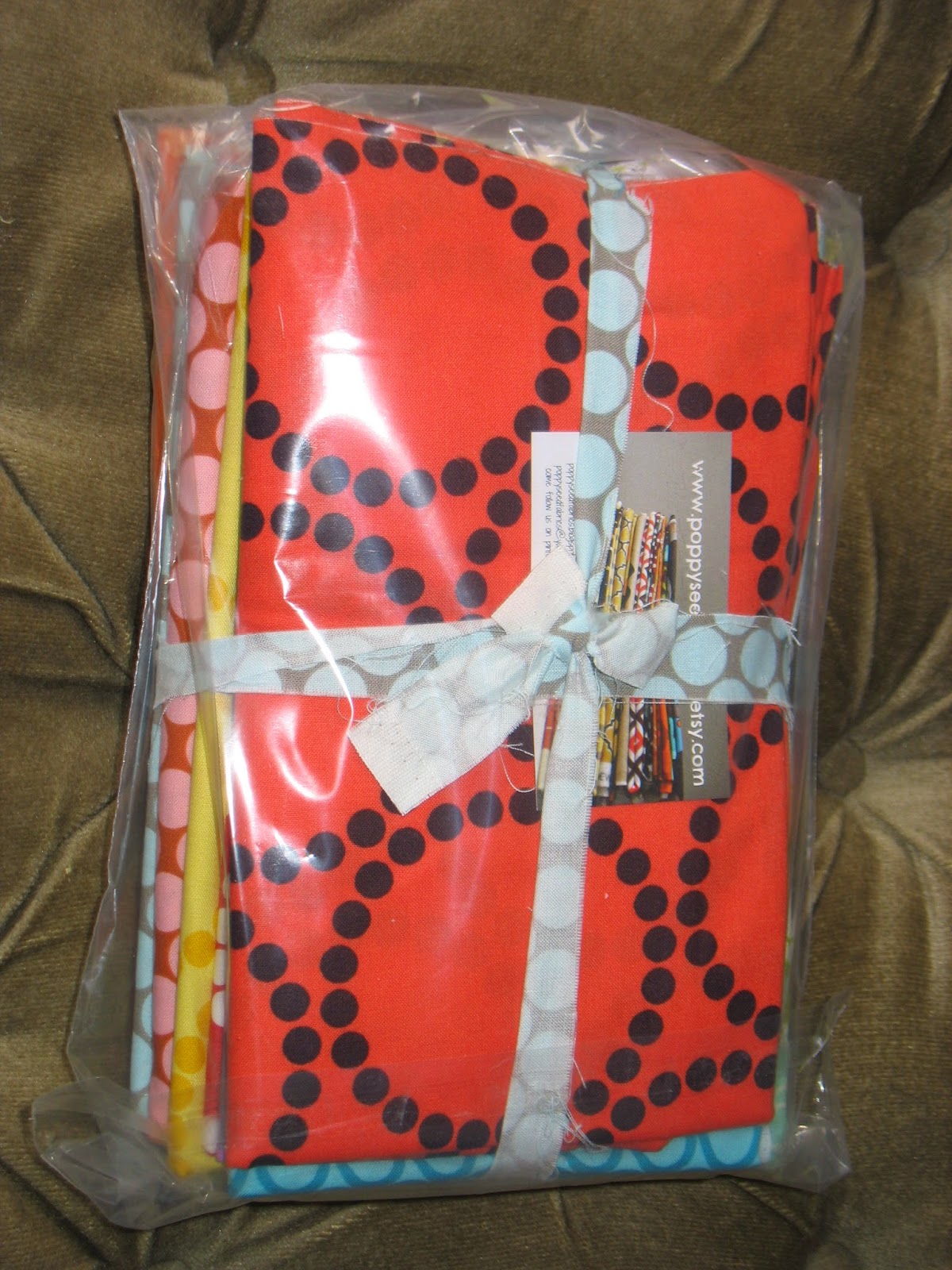 And these are the fabrics I chose: 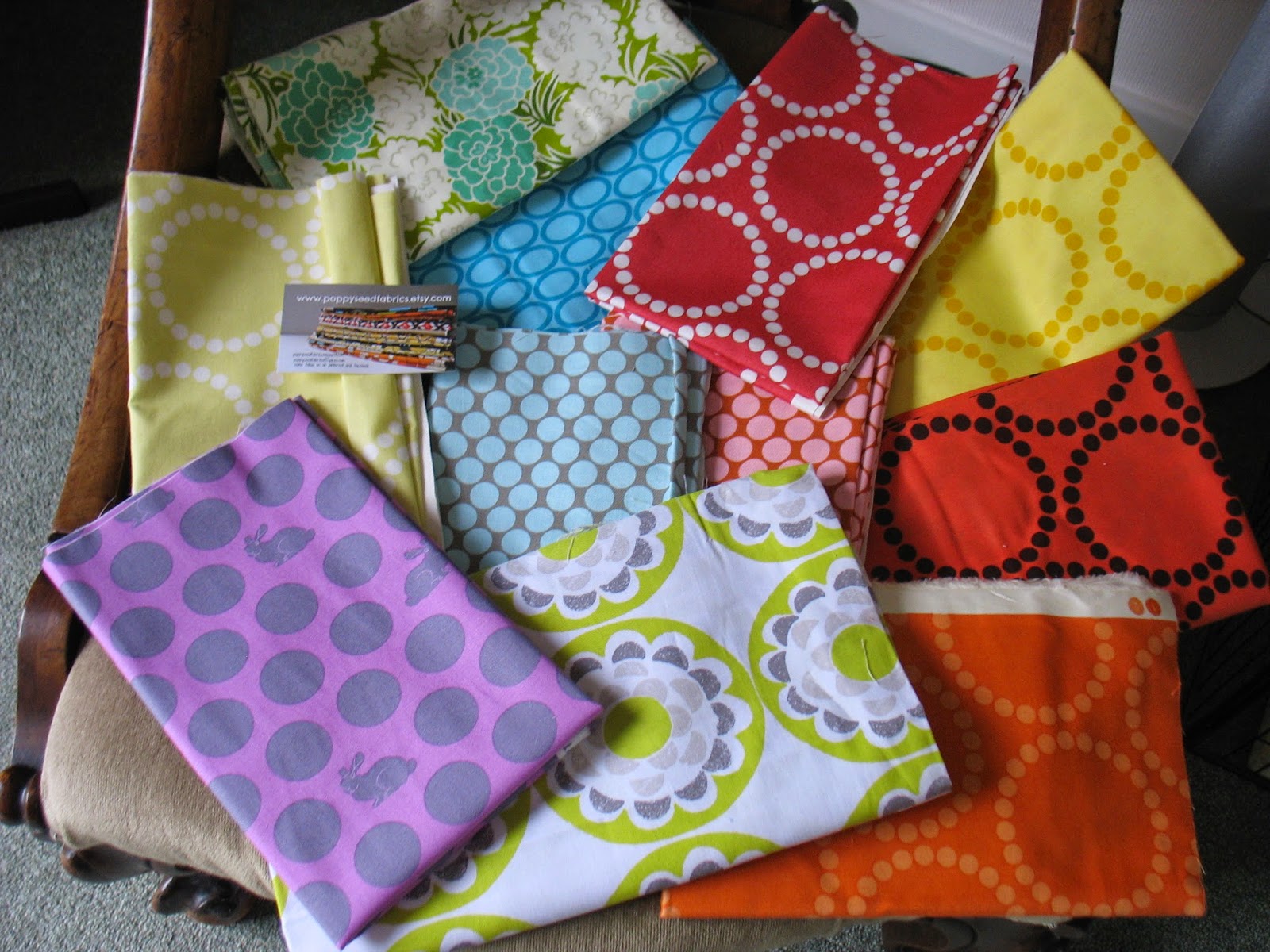 Several Pearl Bracelets and also a selection of Amy Butler fabrics. Aren't they gorgeous?
I have admired Pearl Bracelets for so long on so many Flickr and Pintrest photos but never owned any until yesterday.  I am a fan of Amy Butler designs and have bought and used several of her designs, including the Full Moon Polka Dots one in Caramel which I chose for my bundle.  It's quite an unusual colour but works well with the variety of pink fabrics I have paired it with in the past.
I made a baby quilt I called Emerging Butterflies.
Here the caramel fabric makes a striking border: 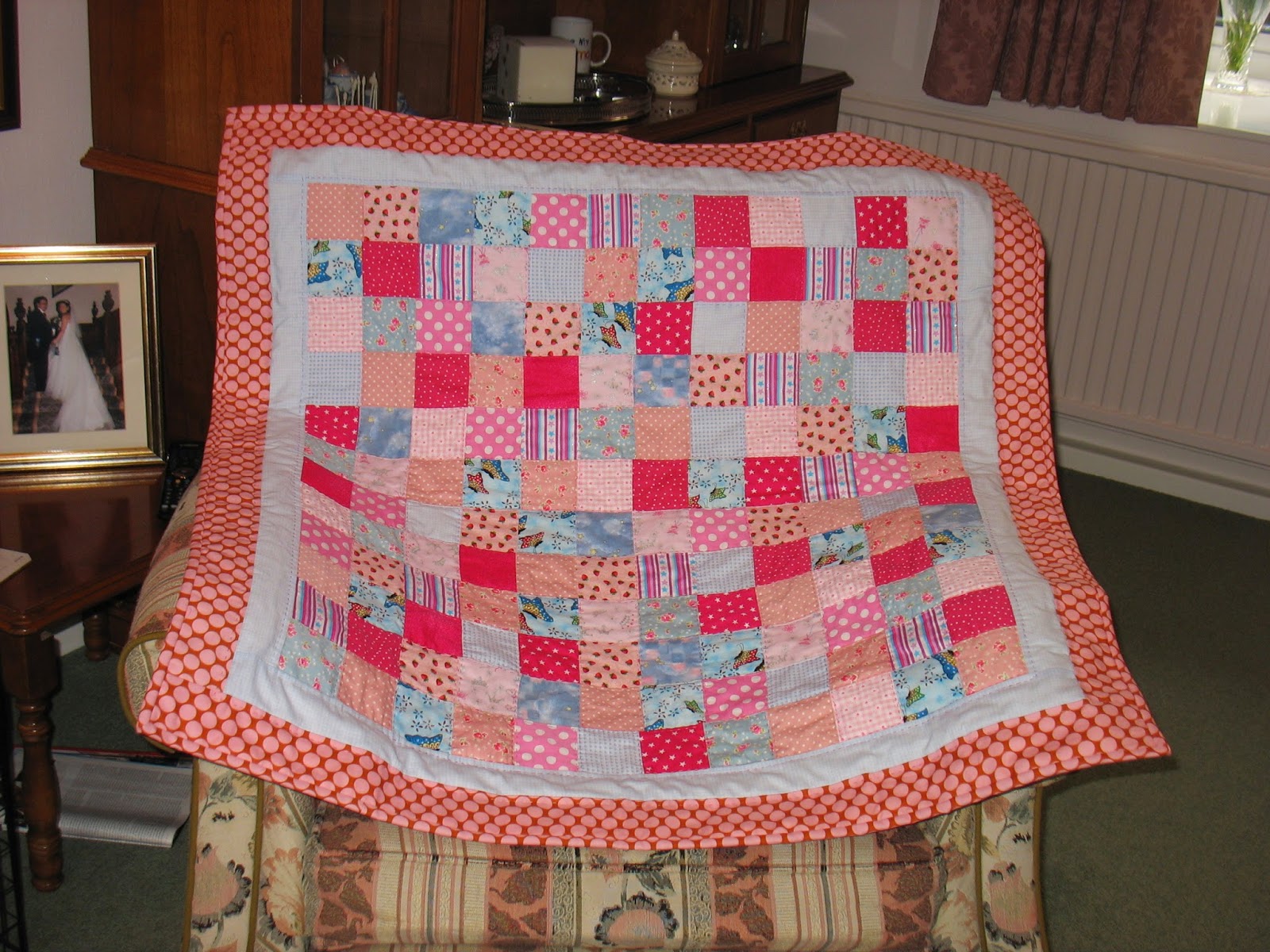 I made a pieced backing for this quilt and used a large piece of the Caramel Polka Dots down the centre and also for the binding.  I love a spotty binding - a tip I picked up several years ago reading Rita's blog!


The backing and binding: 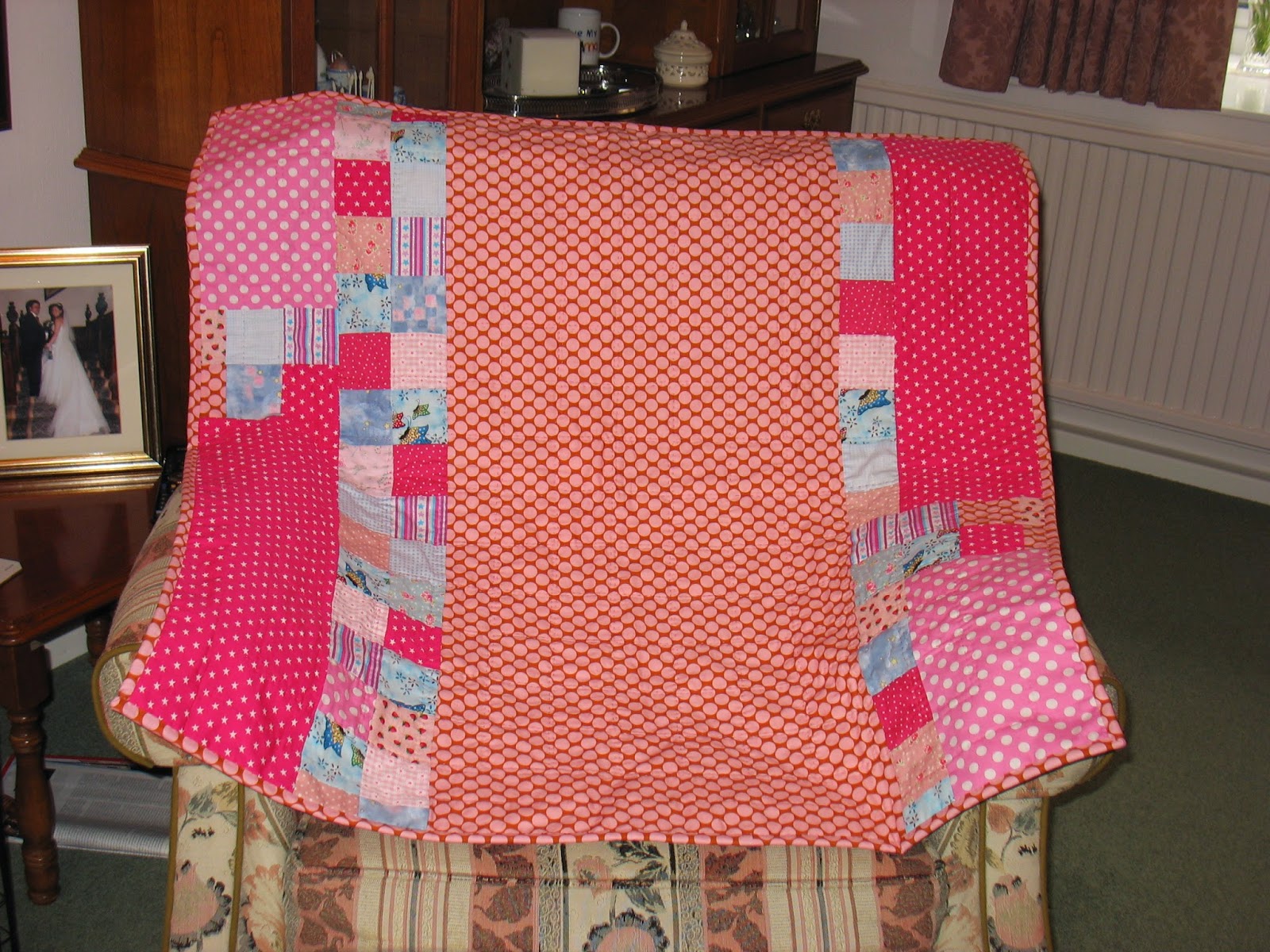 I am delighted to have another yard of this useful and pretty fabric in my stash.
So, thank you Rita and Kimberley for this great Giveaway.  I will enjoy adding the fabrics to my stash and using them all in the months to come.

Not sure where the summer has gone, I certainly haven't done much sewing although I have enjoyed the sunny weather and the garden.  I have also spent a lot of time with the family, especially my four year old granddaughter.

So, now it is September, the schools start again this week and our little girl starts school!  She will be attending the same one her Mummy went to and where I taught for the last 9 years of my career.  So lots of happy memories!

More memories as I have been sewing name tapes on her school uniform and I also made her a Patchwork PE bag.  When her Mummy started school I made her a drawstring bag too although it was very basic ( I didn't really sew then, had not discovered my obsession called "Patchwork and Quilting" and certainly didn't know how to create a proper fully lined drawstring bag with a casing!). I am very pleased with the resulting bag and hope the family is too when I pop round this afternoon with it. 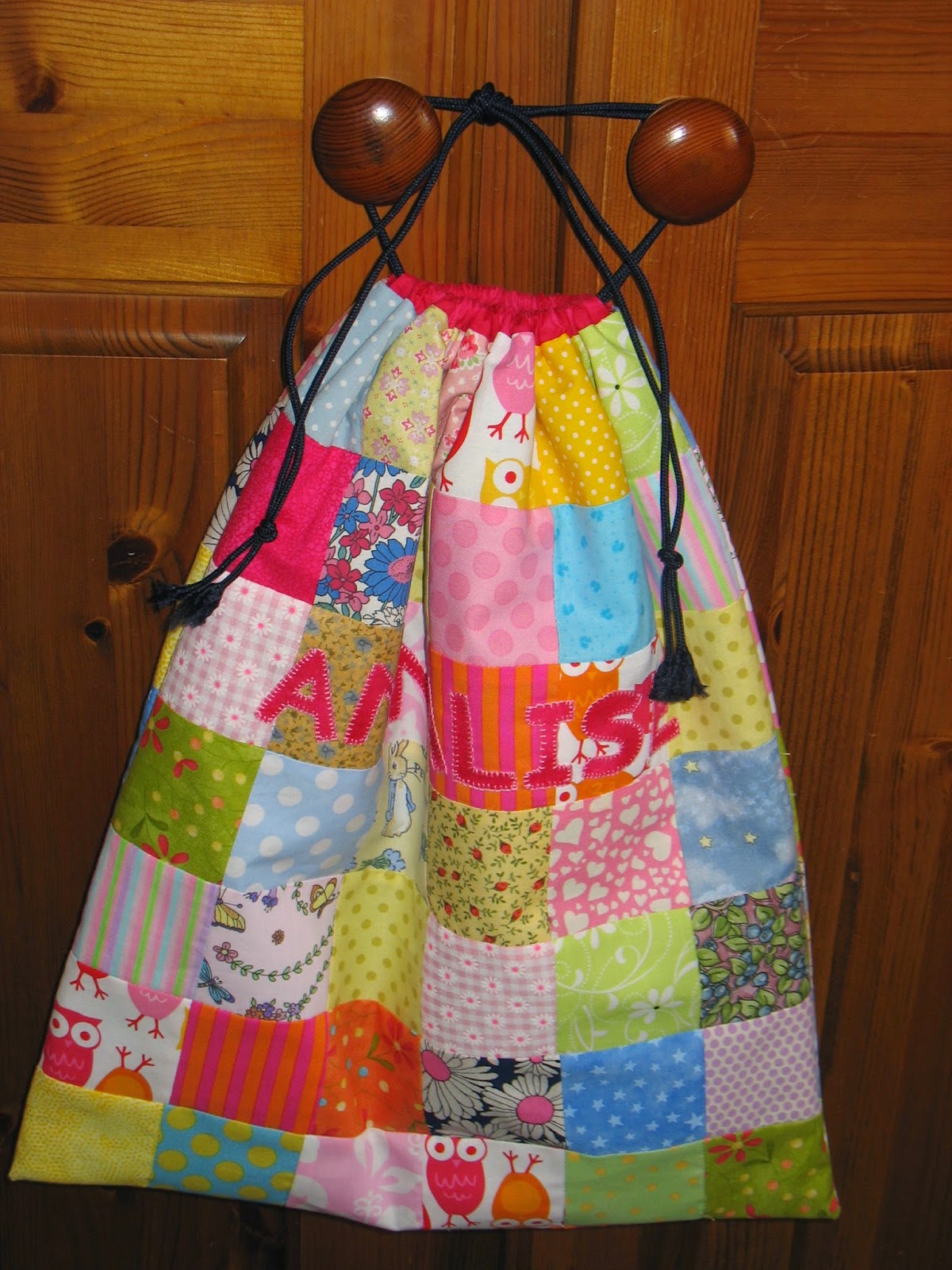 And now, a photo of the undrawn one to show off the patchwork and appliqued name! 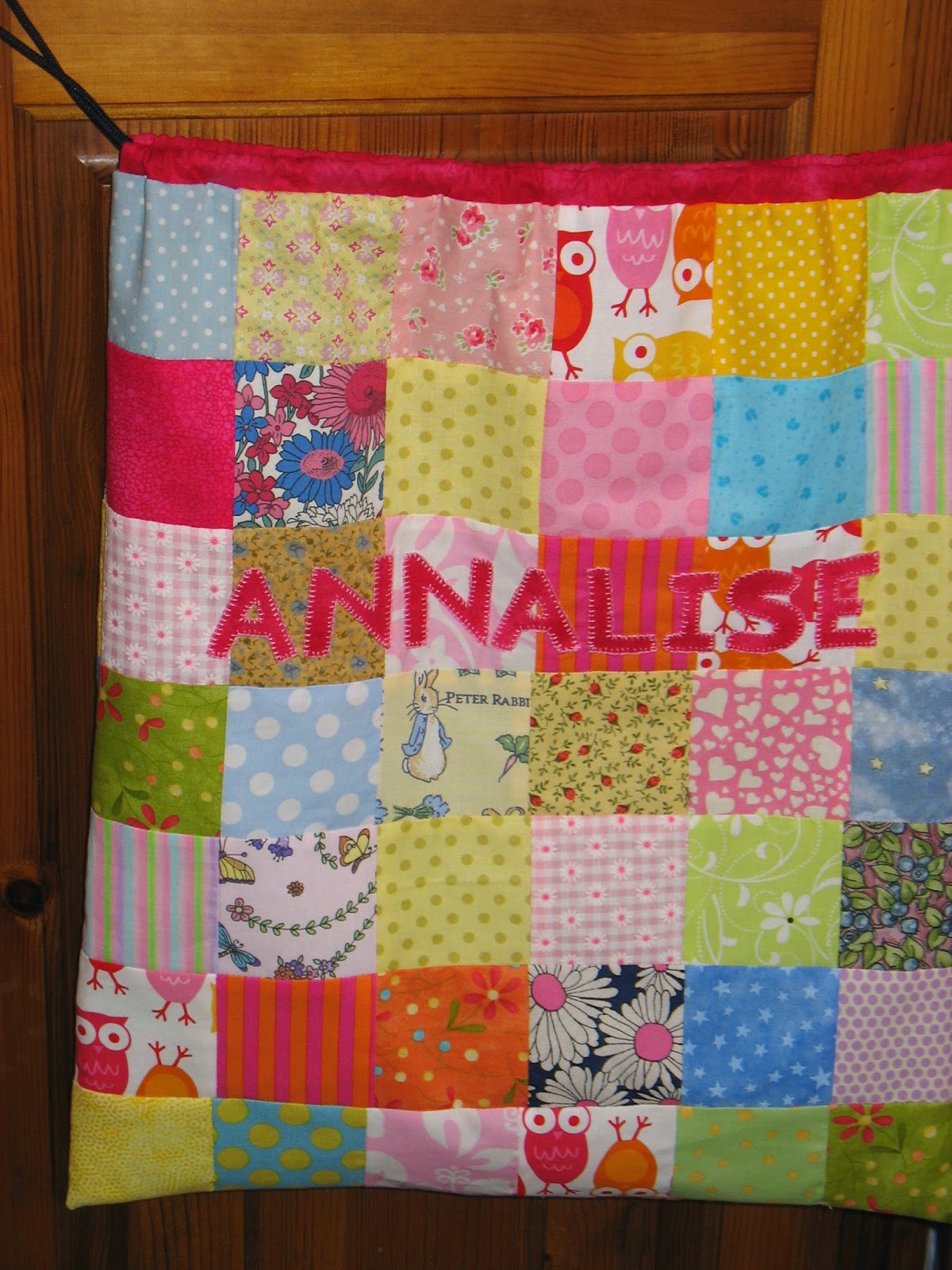 I had to include a square of Peter Rabbit fabric as Annalise adores him.  She spends many happy hours pretending to be him and inventing various escapades where Grandpa chases her round the garden as either Mr Fox or Mr McGregor!  I am wondering how many milliseconds it will be before she spots him on the bag!

She also likes butterflies and owls so they are included too.

Back in June I made a baby quilt as a commission for a neighbour to give as a gift to a baby girl who was born on 22nd June.  My neighbour wanted to hand the quilt over in person and the first opportunity was last week.  Apparently the parents were thrilled and didn't stop "oohing and aahing" for ages!  Just the sort of response one hopes for!  I have been promised a photo of baby lying on the quilt in clothes matching the quilt colours.  I chose the colours because I thought they were feminine and pretty but didn't realise the baby already owned clothes in the same colourway! Serendipity! 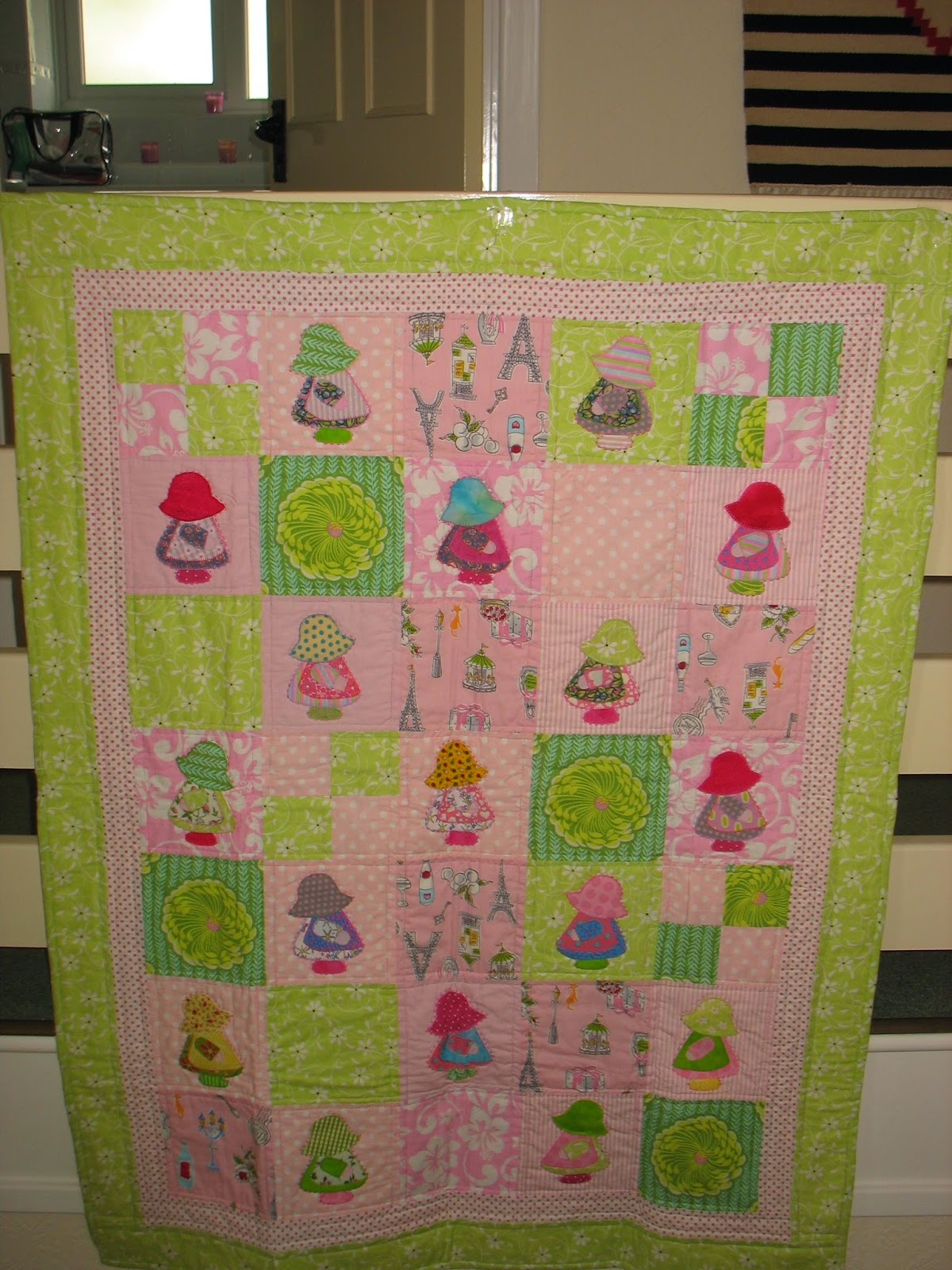 I have almost completed another baby quilt top.  This time for a boy (in case one of the three expected babies I know about is a boy).  Just have the two borders to cut and sew on, then I shall be ready to sandwich and quilt it.  Now I have discovered machine quilting I think this may very well be a machine quilted one. There are a lot of small HSTs  which surround the blocks so I think quilting in the ditch may be the answer.  Stay tuned!