I have followed Jan Macfadyen's blog for a few years.  She does the most amazing work making quilts for charity. At present she is concentrating on making quilts for a Woman's Refuge.  I am just amazed at the sheer quantity of quilts ( and crocheted blankets) that she produces. She also works shifts at a hospital so where she finds the time to juggle sewing, a job and a husband and family is incredible. And when does she sleep??????????

Jan receives donated tops as well as orphan blocks, QAYG string blocks, fabrics etc and turns them into completed quilts so quickly.  Do have a look at her blog where you can see her work.
sewmanyquiltstoolittletime.blogspot.com

I have made QAYG blocks for Jan a couple of times but promised to make some more once I was settled in NZ. I have looked through my small NZ stash and decided many of the scraps have hung around far too long.  So I cut them into strips of various widths, found all my bits of leftover batting and made some blocks to send to Jan. You can even piece the batting for these QAYG blocks ( she explains all this on her blog) so they are economical to make as well as putting those scraps to good use.

I also used Bonnie Hunter's video to find out the best way to 'de-bone a shirt".  You can find this under the Tips & Techniques tab on her blog quiltville.blogspot.
I had one of my husband's shirts to cut up - perfectly good fabric except for a slightly worn collar. It took about 10 minutes to de-bone it into good sized pieces to use to back some of my QAYG String blocks.

Jan uses both 10.5" and 12.5" blocks so I made as many of each as I could with the fabric sizes I had.
I even pieced some of the backs of the blocks. 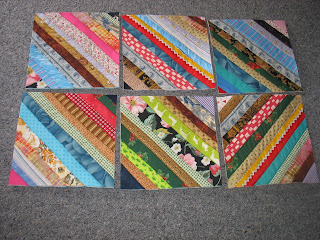 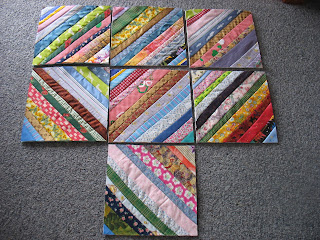 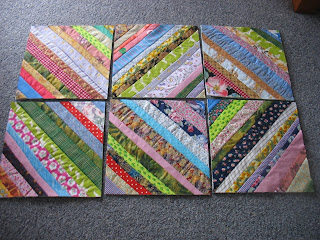 I know Jan has completely depleted her stash of blocks so I hope these will start her off on her next couple of Charity quilts. I will post them when I go into town tomorrow.

Look what I won!

Our first day back in our NZ house I went to a local Quilt Show.  Really good venue in one of the church halls in town. Lovely quilts, all displayed very well. This is a new annual show, only started last year. The idea of a couple of local quilters who felt there were quilters who did not belong to clubs so were unable to display the lovely quilts they made.  There was a raffle in aid of St John's Ambulance so of course I bought a few tickets and - amazingly - I won Second Prize which is a beautiful Zig Zag Quilt. I really like Zig Zags and once made a scrappy one for a baby quilt gift.

I love the white backgrounds to the different coloured zigzag stripes. And my favourite colour, aqua for the boarders and binding.  I am thrilled!  It's a lap sized quilt so I know I will use it back in the UK. 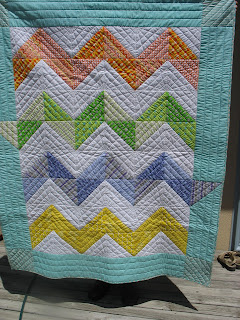 I have signed up to be part of a Bee making quilts for Siblings Together. We have a Queen Bee for February, Tanya, and she has already given us our block which is a 20" Log Cabin design. Ideally with a solid fabric centre, all the logs in the same colour as the centre but as many different fabrics as you like.  As I had the opportunity to make them yesterday afternoon I decided to seize the moment and make both of mine.  One in pink and one in green as when I looked at the very limited stash I have here in NZ, I discovered I had most in those two colours. I didn't have any solid green fabric so chose one which has a butterfly design that I think stands out fairly well from the surrounding logs. 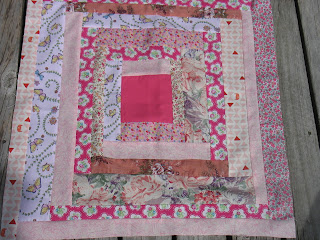 Here is the green one which my computer has unhelpfully turned around so that the dogs and sheep aren't walking along the horizontal. 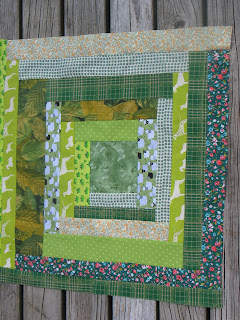 I have made loads of log cabin blocks before but never any this size!
I will mail them back to the UK when I am next in town.
My husband went fishing with our next door neighbour yesterday and caught some gurnard, my favourite fish. It was absolutely delicious. I made a dish of roasted vegetables to accompany the fish - all the veggies (pumpkin, onion, green and yellow courgettes) were from the same neighbour's garden.  So, a VERY local meal! 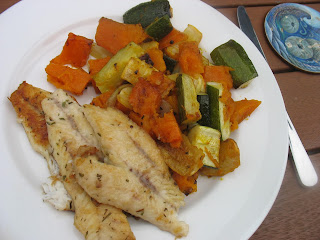 Scraptastic Tuesday - although it's actually Sunday!

I have just signed up to a Bee to make blocks for Siblings Together. Such a great cause, making quilts to gift to children who have been separated from their siblings. Each year a camp is arranged and children are able to meet up with their separated siblings. Each child is given a quilt. I made a quilt for Siblings Together about three years ago so decided that taking part in a Bee would be a good idea. I have never taken part in a Bee before so I'm eager to see how it works.

This was the quilt I made for Siblings Together: 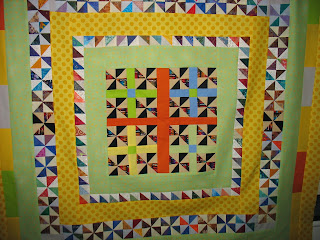 As a result I have discovered a new blog to follow: mrssewandsow and her Scraptastic Tuesday button. Scraptastic _Tuesday


I entered my Heartstrings quilt which I gifted on Friday to our lovely NZ neighbour Liz who was celebrating her 70th birthday. She loved the quilt so I was very happy!
Heartstrings 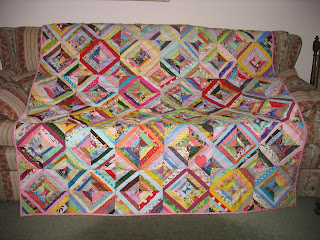 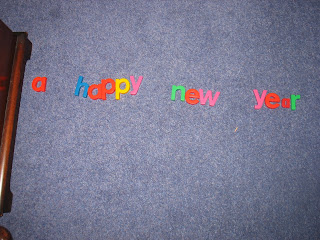 Our five year old granddaughter was here today and disappeared into "her" room for a few minutes. This was her Mummy's (our daughter's) room but DGG has it as her room now, full of our children's toys and books and where she sleeps when she stays over with us.
After they left I found this message she has left for us, spelt out from a box of plastic letters.
So I am passing her message on to you.
I hope 2016 will be a good year, full of good health and happiness and lots of sewing too!
I have been looking back at a post I wrote in January 2015  .......... I am still getting used to the idea that 2015 is now "last year".
I cleaned out my Sewing Room and found various WIPs which I said I would finish.  How successful was I?
On the positive side I completed an almost finished quilt top which made a nice quilt that I gifted in June to baby Rebecca. 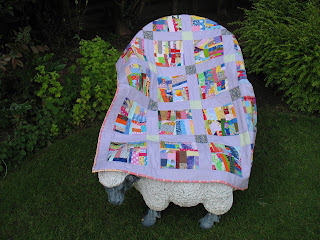 I used a lot of the strips and squares I cut from scraps .................... and have cut loads more to add to stash!
However, on the negative side my Project Packs have remained untouched, also most of the packs of blocks I found during my Big Sort Out.
As a result I already have lots of old WIPs that must get finished in 2106. I hope.
However I have accomplished a lot this year:
So, all in all 2015 was a busy and successful time on the crafting front.
Here's to 2016!
Posted by Linda at 10:55 2 comments: