Here's what I've made so far: 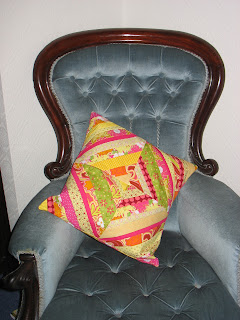 And for Doreen's 80th Birthday: 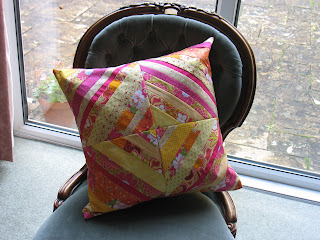 Finished today, another String Quilt to be gifted in a couple of weeks' time: 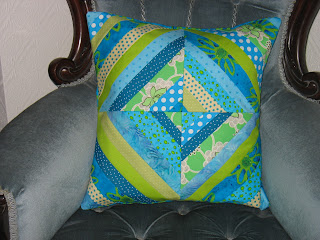 I love making String blocks and hunting out scraps to tone and/or contrast with the main fabric.

Now starting a fourth cushion for a Patchwork friend who will be celebrating her 70th birthday in December. I'm really on a roll!


Having a great time sewing at present. I have several baby and children's quilts to make so in between sewing strings together I have pieced a cream background for another I Spy Bubbles quilt, using up several old pieces of cream fabrics I had gathered together for this purpose.  It's for a 2.5 year old little boy, Robert, my husband's cousin's grandson. We didn't know about his expected arrival until it was too late for me to make  baby quilt so Robert had a regular shop bought baby outfit.
When his brother James came along 9 months ago I made an I Spy quilt for him which has been loved and admired by all the family.  As it was such a great hit, when I saw Robert two weeks ago at his Grandpa's birthday party I asked if he would like an I Spy Quilt too?  Yes, please! 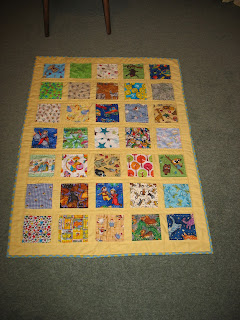 I have decided to make another I Spy quilt using the Freckles design from the Scrap Republic book by Emily Cier as I love making them and they are a great handwork project.  I have decided to increase the dimensions by 10" in each direction so I will need lots more fussy-cut "bubbles".
So, the backgound for Robert's quilt is made and I now have the exciting task of looking through all my fabrics for interesting I Spy motifs.
At the same party I met another of the same cousin's grandchildren, a delightful 19 months old little girl called Ava.  Again we didn't know about Ava's arrival until the last moment so I hastily stitched a set of burp cloths and two-sided flannel cot sheet to mark her arrival. 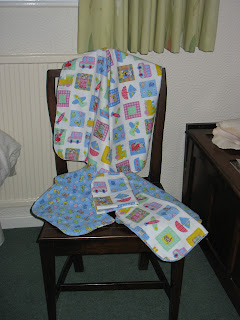 As I'm making a quilt for Robert I feel I must make one for Ava too.  I have an idea in mind, a strip quilt of various pretty girly pink fabrics.
Three more babies due next year, so I have lots of quilts to make!  But I LOVE it!

Well, I spent an enjoyable time this morning gathering together the little gifts I have bought or hand made ready to put in my Shoebox for my contribution to my Church's donations to the
Samaritan's Purse Operation Christmas Child.

Here's a photo of the small presents: 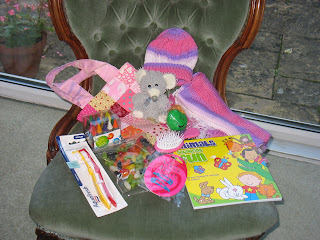 My box is for a little girl, aged between 2 and 4 years old.  Hence a lot of pink!
Then I covered a shoebox with Christmas paper and wondered if I would fit everything in! 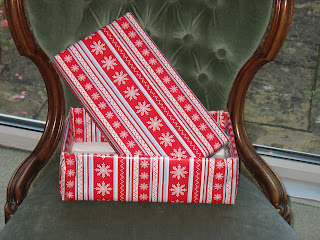 Amazingly I fitted all the gifts in and there is room for more! 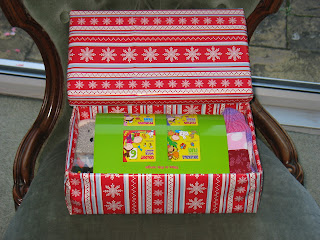 Look how easily I put the lid on the box! 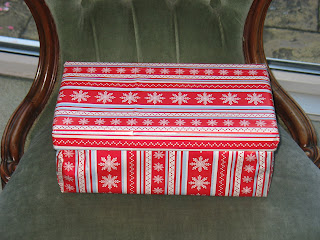 So now I will be able to look for a few little extras to fill in the gaps! This is the sort of shopping I enjoy.  Perhaps a little purse, a bracelet, a pack of stickers? And a few more sweeties?

I enjoyed taking part in the Swap-bot Scrap Vomit Squares swap organised by Angie gnomeangel.com who lives in Canberra.

Angie also ran a Giveaway of a set of 49 SV Squares which I was lucky enough to win.
Here they are: 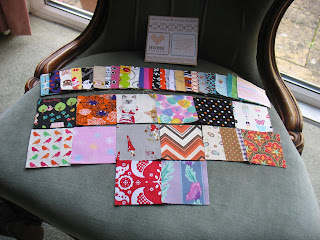 All three of my packages from my three swap-bot partners have arrived, from different parts of the globe. Always exciting to receive goodies in the mail! 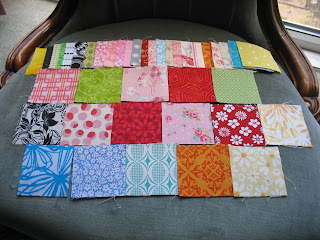 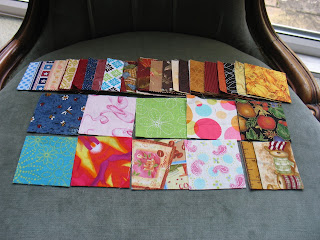 And some really quirky ones from Dorte Petersen  ( Not yet the Dodo! ): 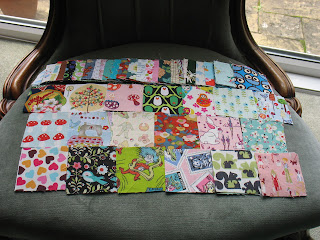 They are all great, a good mixture of colours, fabrics and shades.  No two alike!
I'm really hooked into this Swapping and hope Angie organises another one as she had promised. She was thrilled with how popular this one was and everyone taking part in the International Swap honoured their promise and sent their 49 x 2.5" squares.
Well done to everyone!
And VERY well to done to Angie who did all the hard work organising the Swap.  Much appreciated! Thank you!