I have been making a baby quilt for a baby boy expected mid November.
I decided on a more modern design, using an idea my friend Sarah uses in many of her lovely baby quilts which incorporates the baby's name, appliqued at the top of the quilt.

I put the top together some weeks ago as the Mum-to-be knew she was expecting a boy.  I hand quilted the majority of the quilt using Perle cotton, leaving the top section for the name to be appliqued and the quilting and binding to be done when baby arrived.  Little rascal came a few days early but I finished the quilt quite quickly and passed it along (via another friend) yesterday.

I love the cool colours of this quilt and I think they will match baby's room décor and his Mum's style. Hope so, anyway.  As long as it is used, that's all I want. 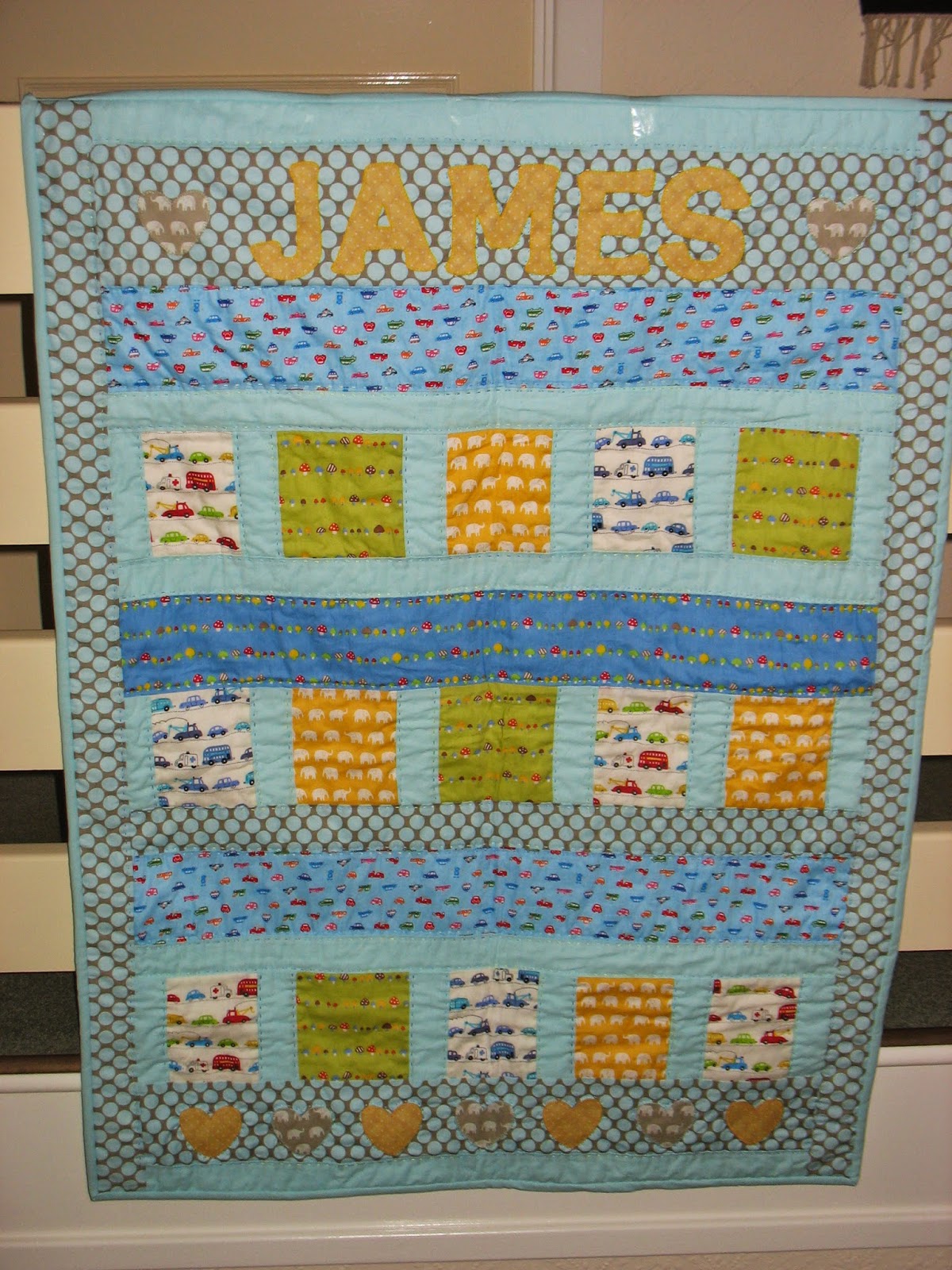 A sneaky peek of the cool green and white striped backing fabric: 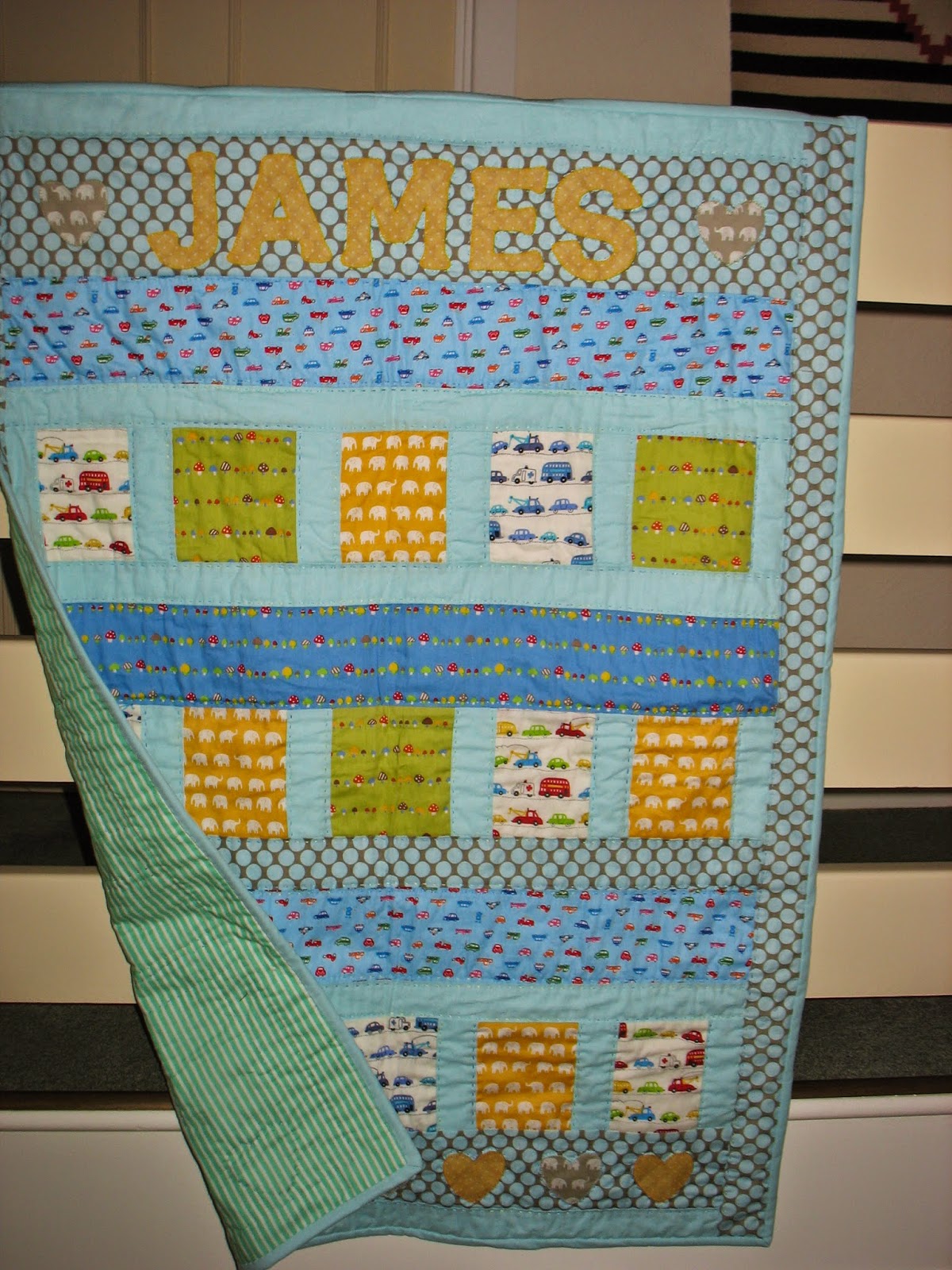 And a Close up of the appliqued name: 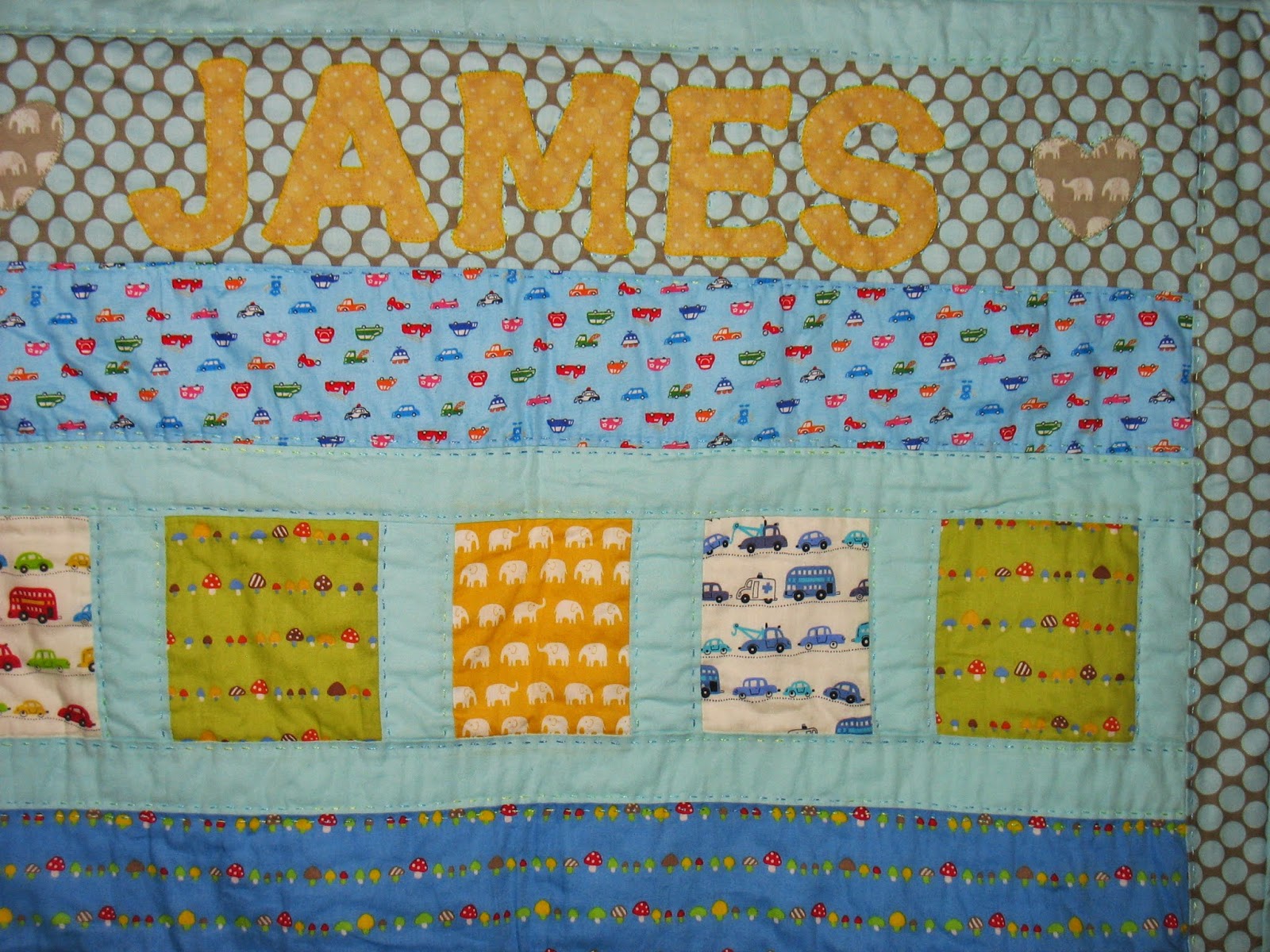 I hope baby James enjoys his quilt.  It measures 30" x 40" so it can be used in a variety of ways:
as a playmat and for 'tummy time', snuggling with Mummy or Daddy, wrapped around in his pushchair, Moses basket or car seat and, a little later on as a cot quilt.
Welcome to the world!
Posted by Linda at 13:29 1 comment:

Seeing a Quilt Show - a bonus

We recently had a great weekend in London - a re-run of one we had to cancel when our daughter was ill and we had to man the fort.

We had visits to two exhibitions planned: The Emily Carr collection at The Dulwich Art Gallery and The Rembrandt Exhibition at The National Gallery.

On the Saturday morning we headed off to Dulwich, a surprisingly easy and pleasant tube and overground train journey.  The Exhibition of Emily Carr's work was amazing.  I knew nothing of this Canadian painter who died in 1945.  She had trekked over many areas of Canada and painted some wonderful pictures of the abandoned villages left behind by the Haida First Nation tribes when they were decimated by smallpox in the 1860s.  Such a clear record of the houses and totem poles.  Emily Carr's pictures of trees and forests are magnificent. She was obsessed by trees and would take her little painting stool off into the middle of a forest and paint what was around her.  Very striking and dramatic works.

On our way to find an Italian Restaurant that had been recommended to us, my husband spotted a flier for a Quilt Show, tied to some railings!

It was the Dulwich Quilters' Show which takes place every two years and was held in the Old Library of  Dulwich College.

Lots of quilts - the ladies are prolific -, nicely staged, lovely homemade cakes and tea or coffee on sale and some very interesting and chatty quilters who were happy to talk about their work.

A few photos for you to enjoy too: 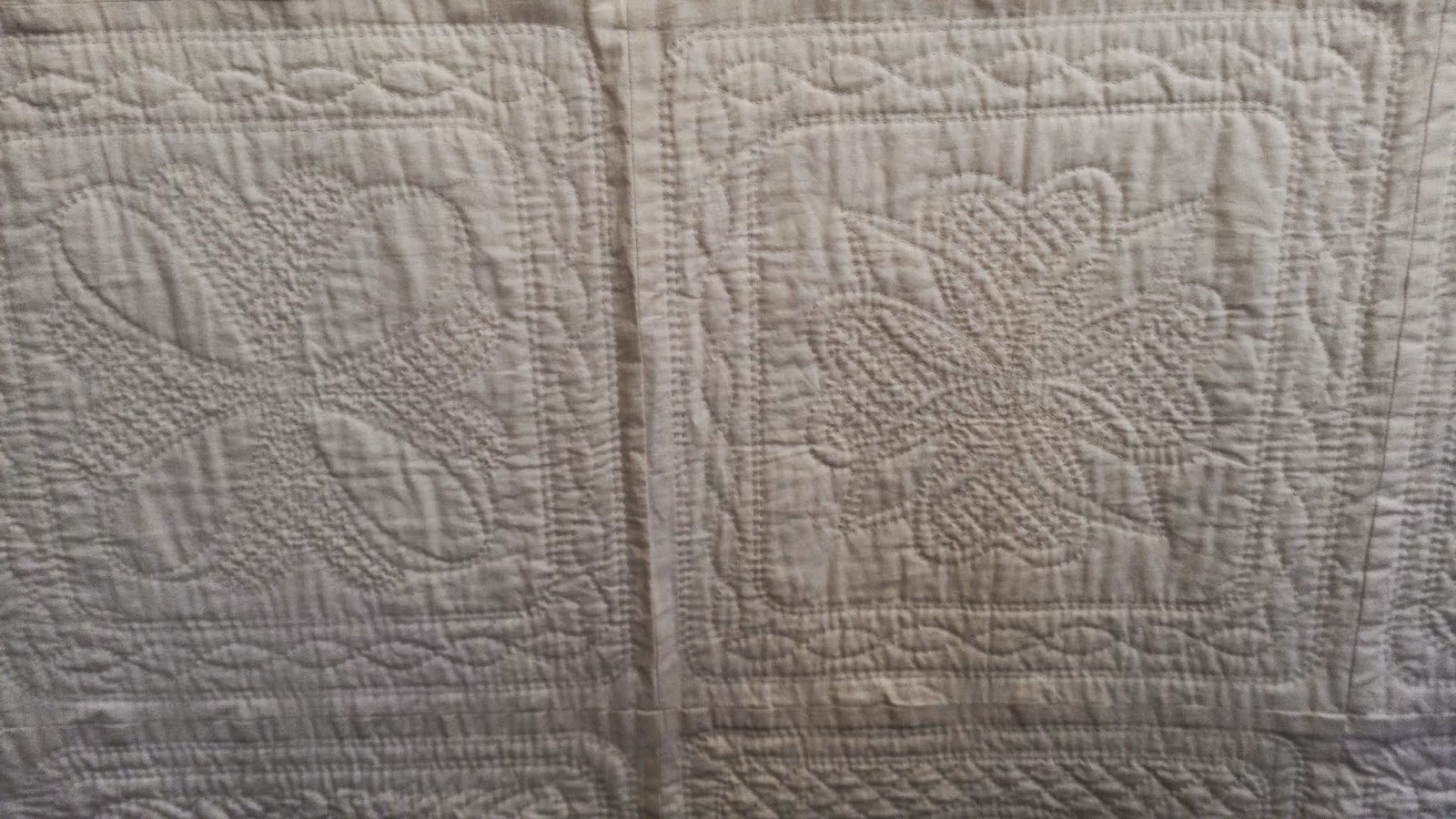 Beautiful Hand quilting on both of these quilts: 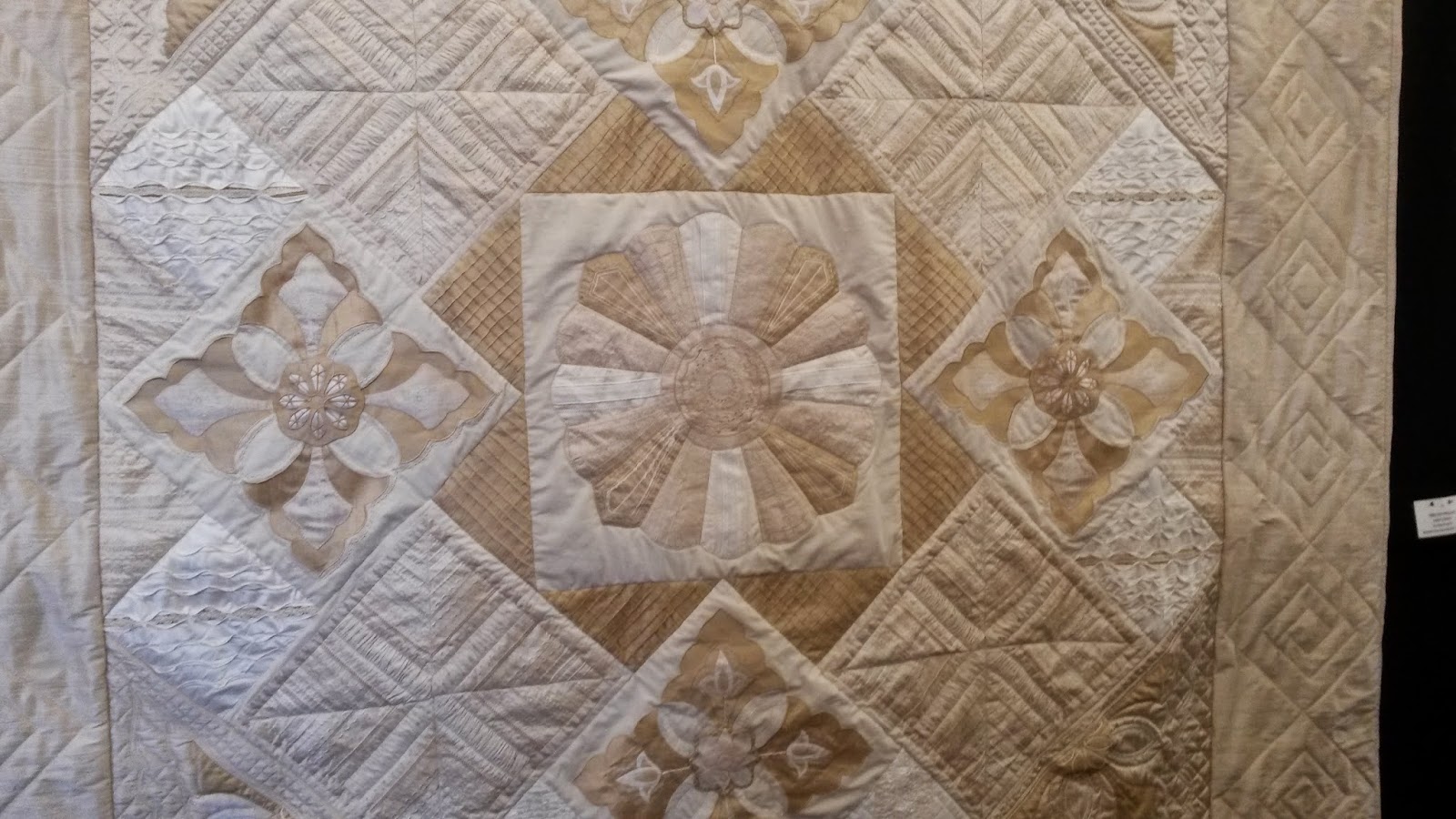 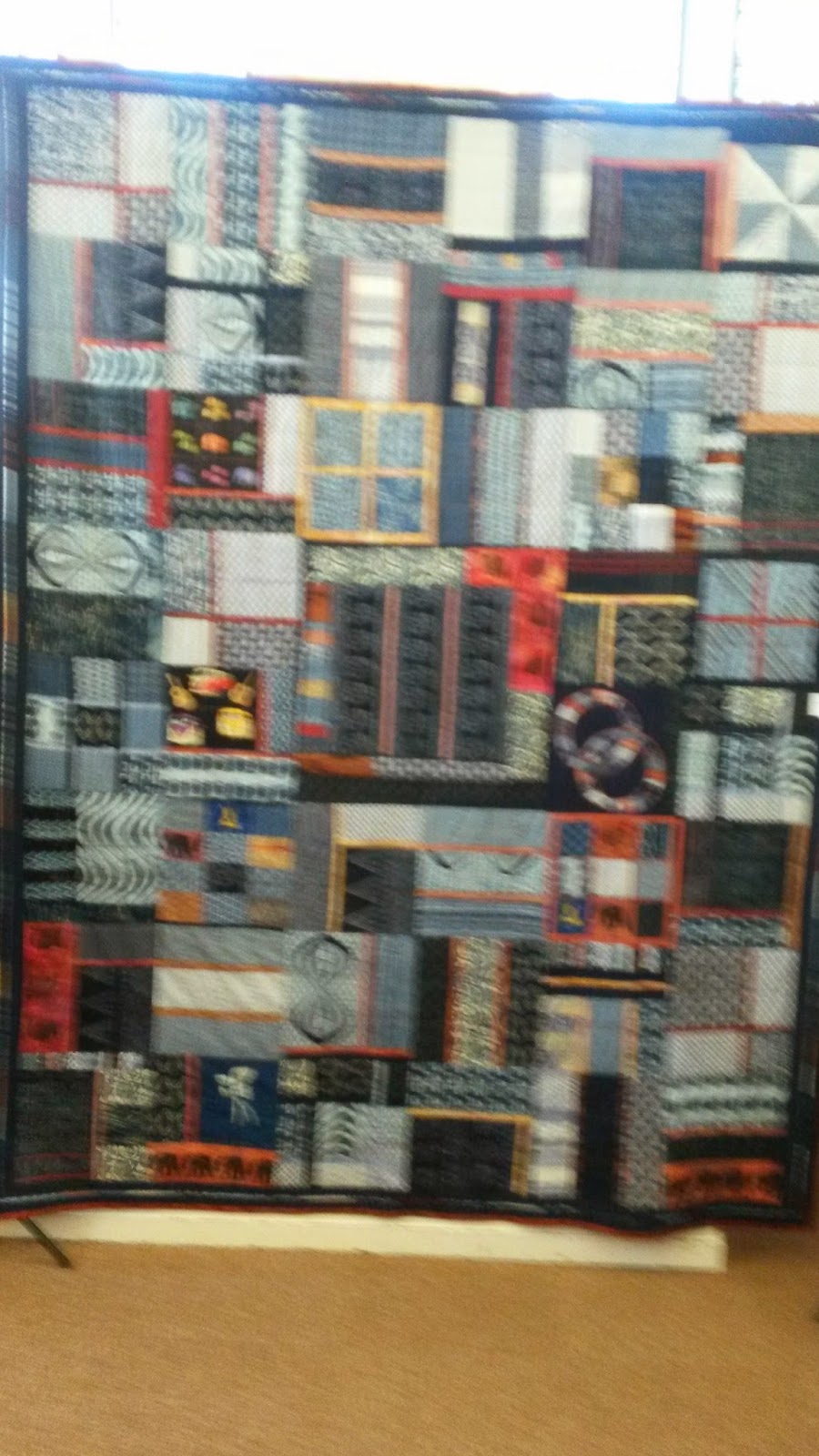 One commemorating the Centenary of the First World War: 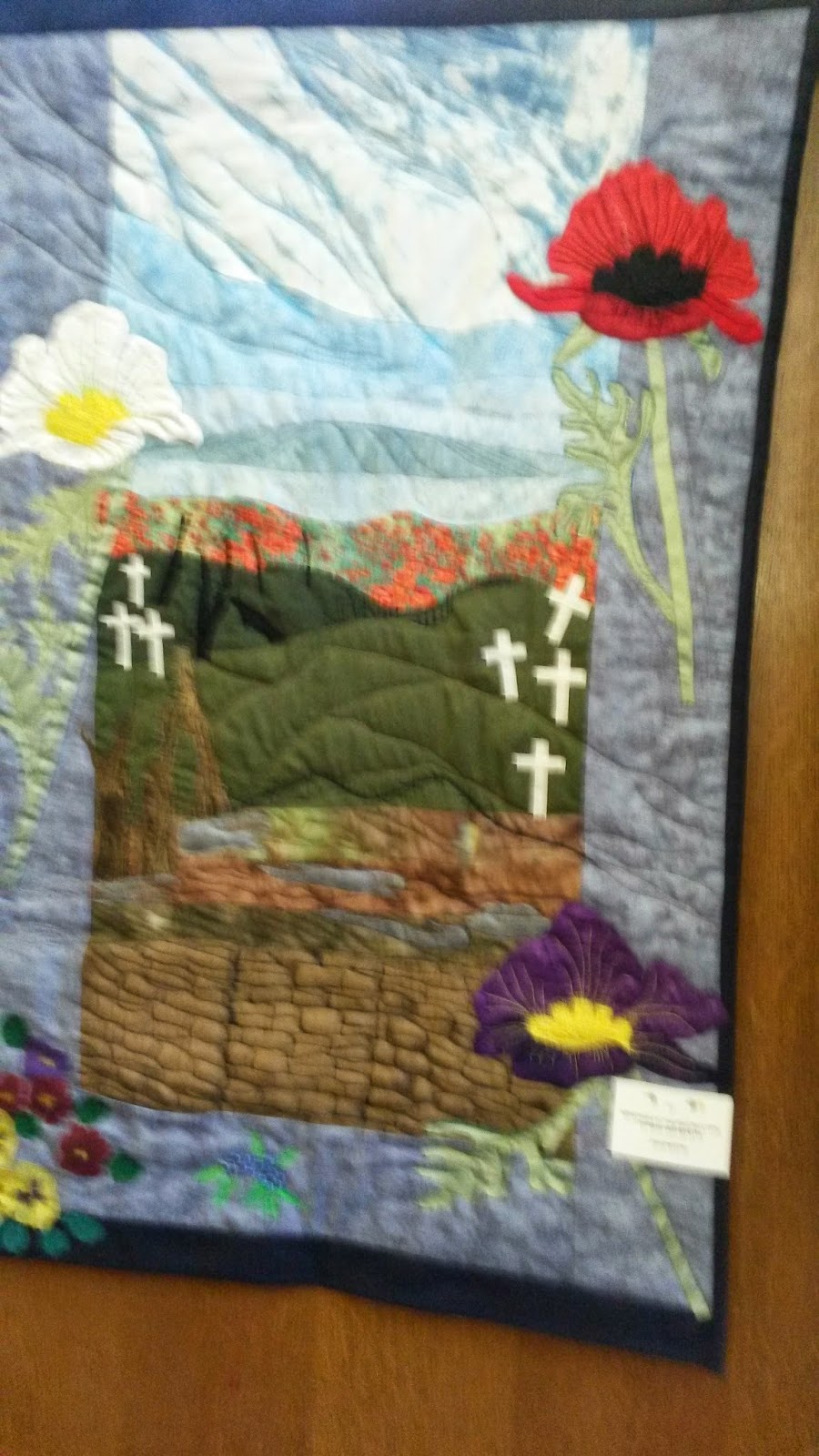 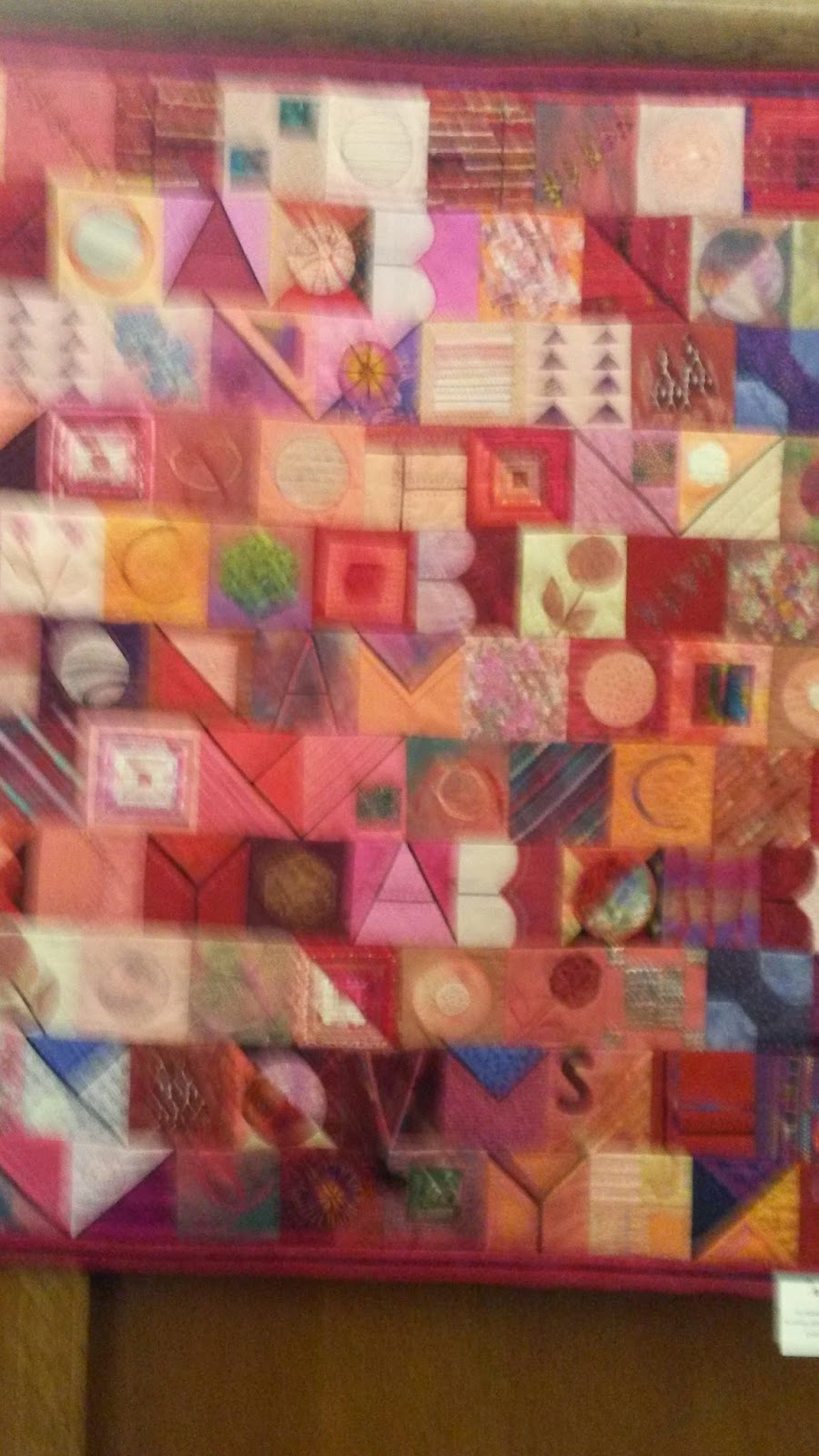 I also enjoyed the quilting quotations dotted around the exhibition: 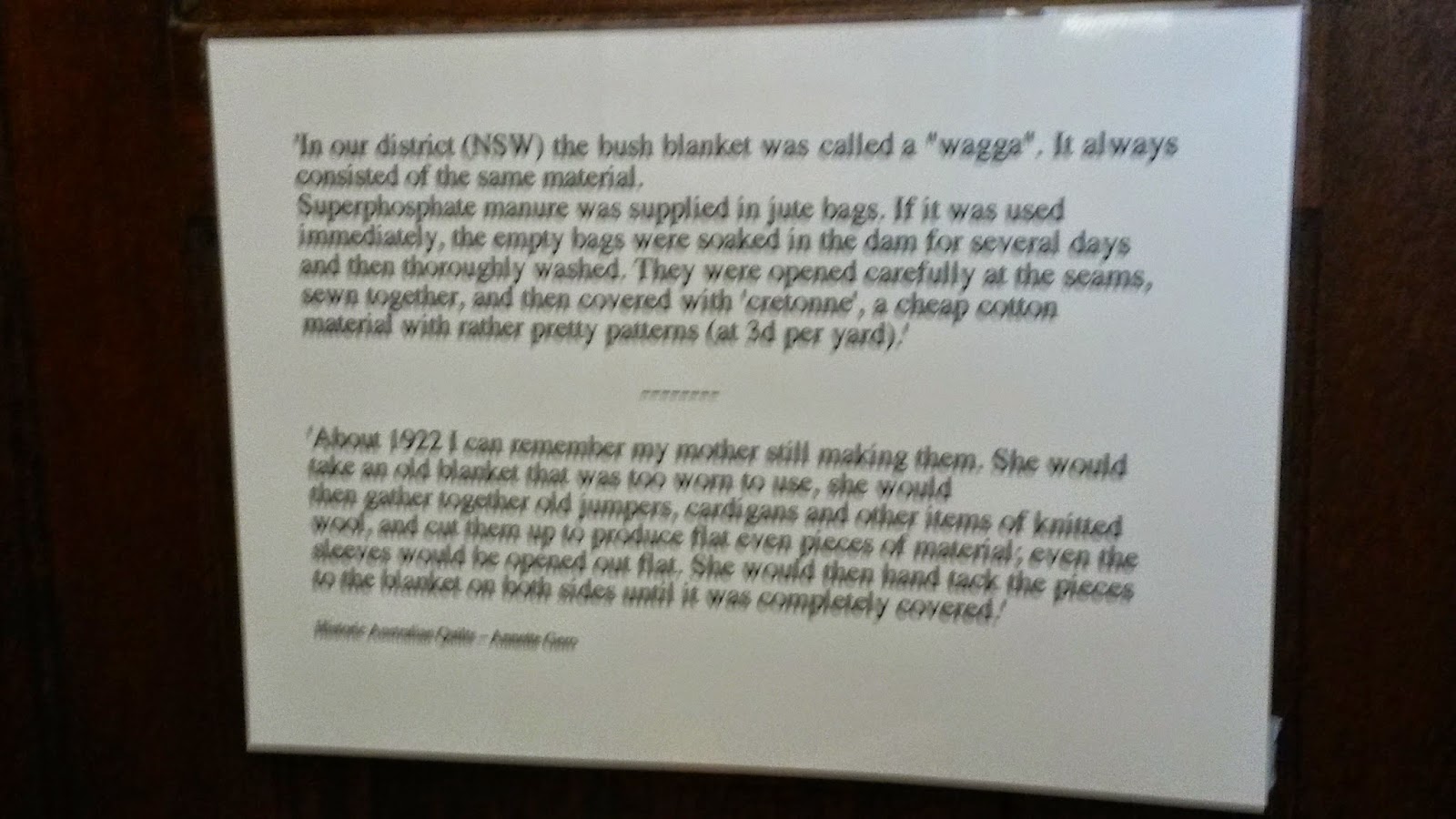 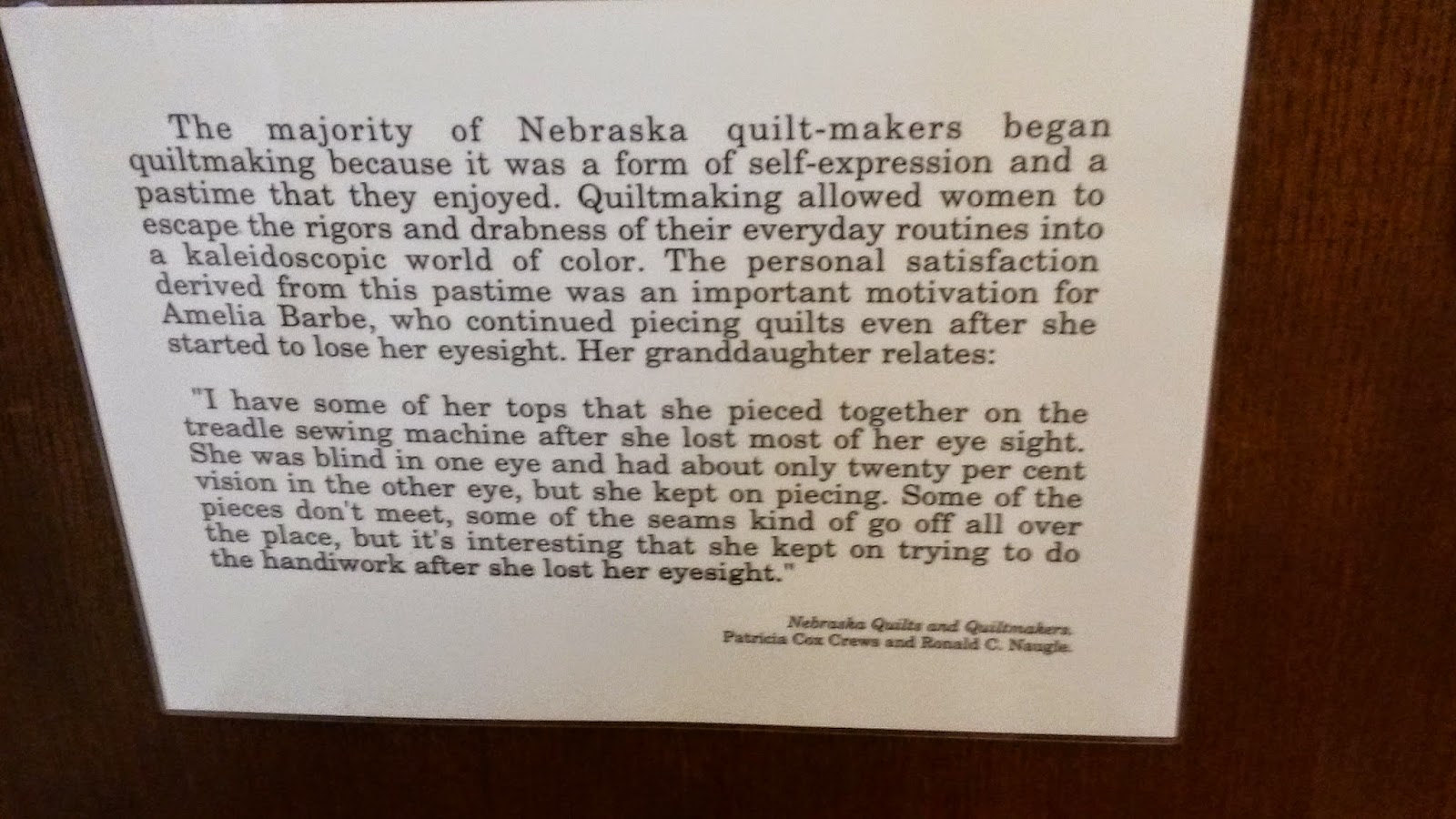 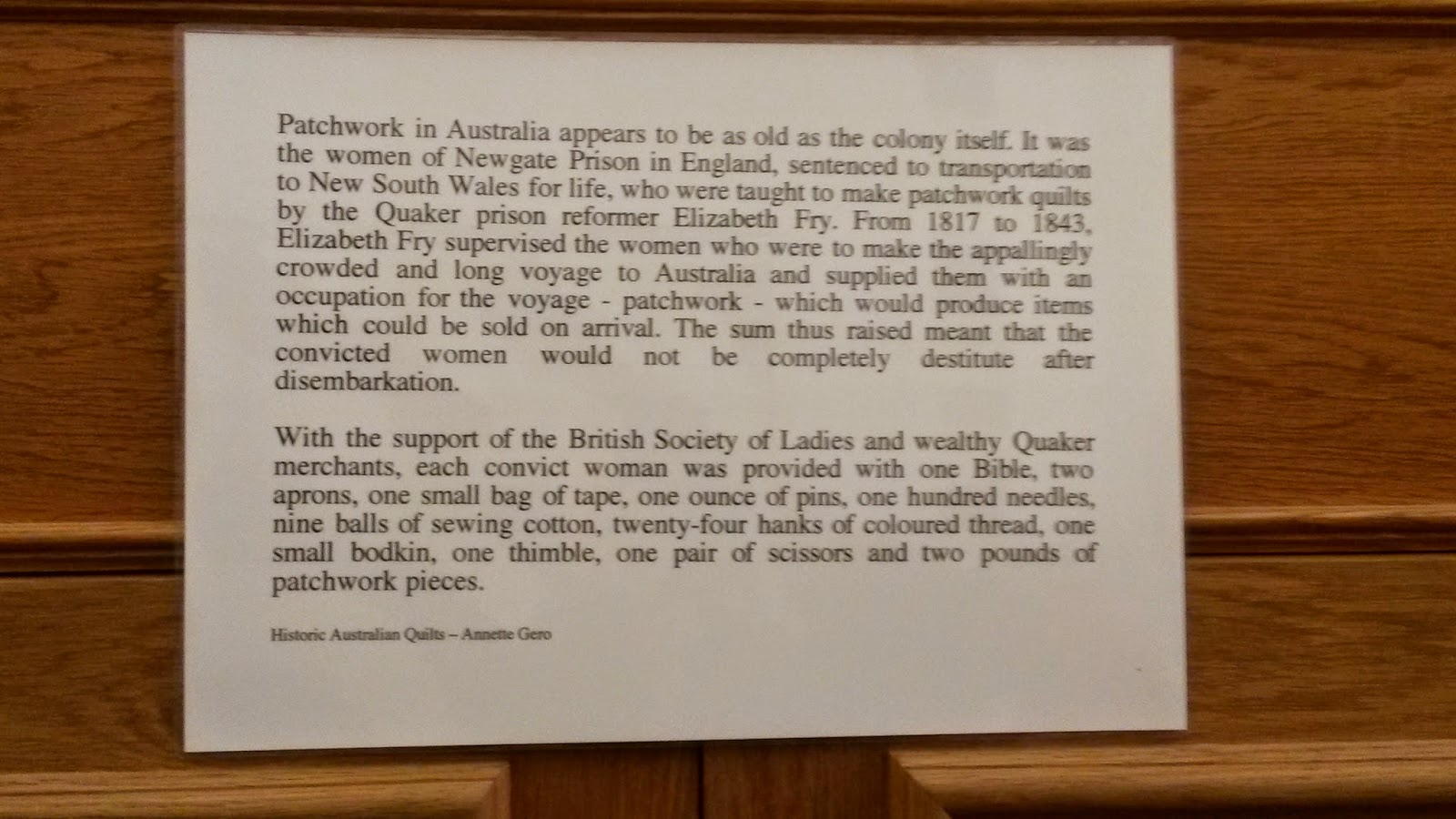 It was an excellent end to a great visit to Dulwich - our first time there but we hope to see other art exhibitions in the future, and perhaps the Dulwich Quilters' next show?

As an avid follower of Bonnie Hunter I am always making Crumb blocks as a leader and ender project.
I usually cut them at 4" square and collect in an old biscuit tin.  The tin was overflowing so I decided to put some together to make a quilt top, combining  ideas from Gwen Marston's book "Liberated String Quilts" and, of course, Bonnie!

A year or so ago I made a Cornerstones Quilt ( Gwen Marston' s idea) using single 4" blocks and sashing them as suggested in this pattern: 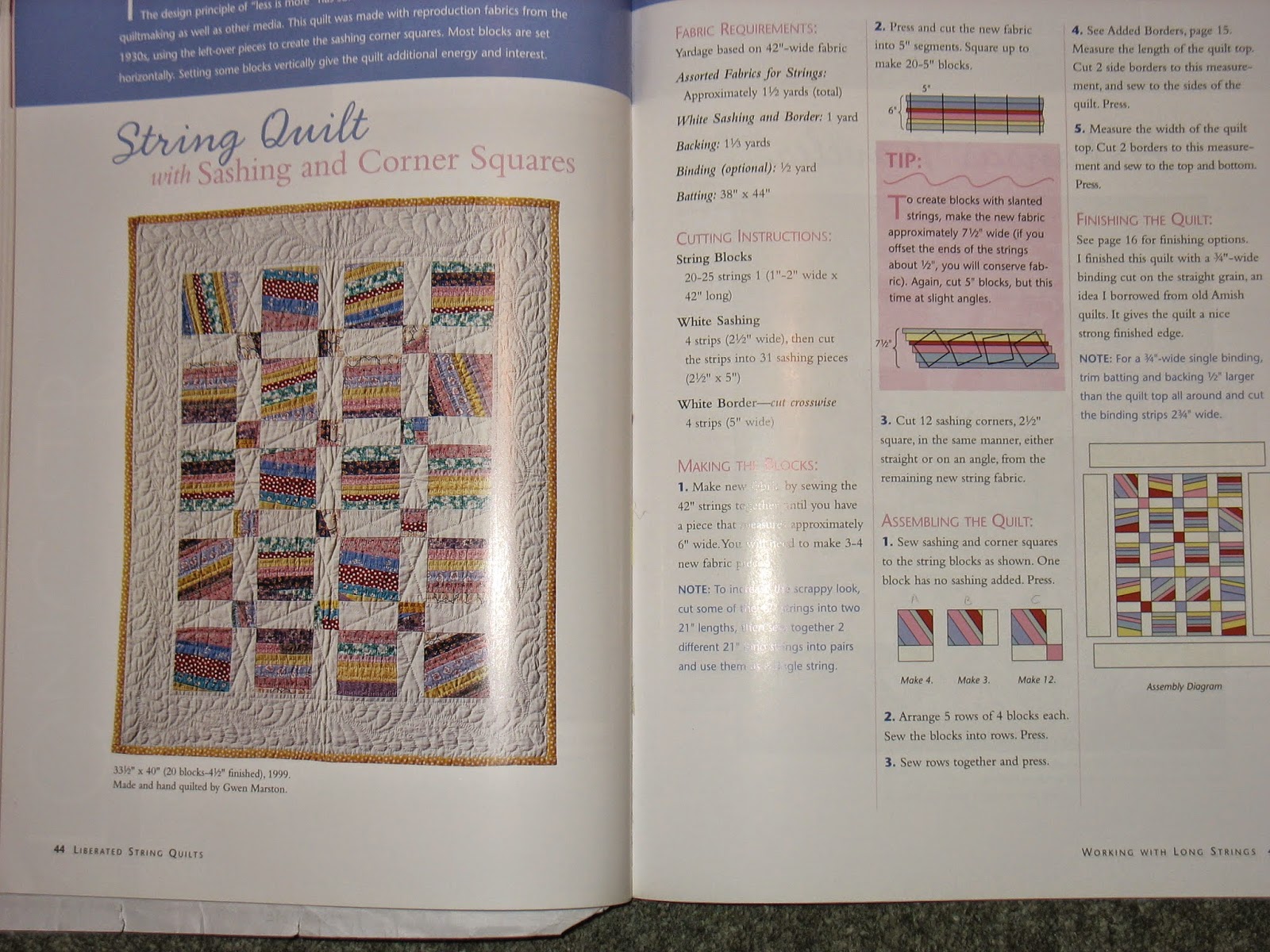 I am sure I have seen 4 small crumb blocks made into a 9 patch ( Bonnie's blog, Flickr, not sure where) so I pieced together pairs, just as they came out of the tin, no over-thinking as this is a Scrap Quilt!
Here's my string of 4" blocks sewn into pairs: 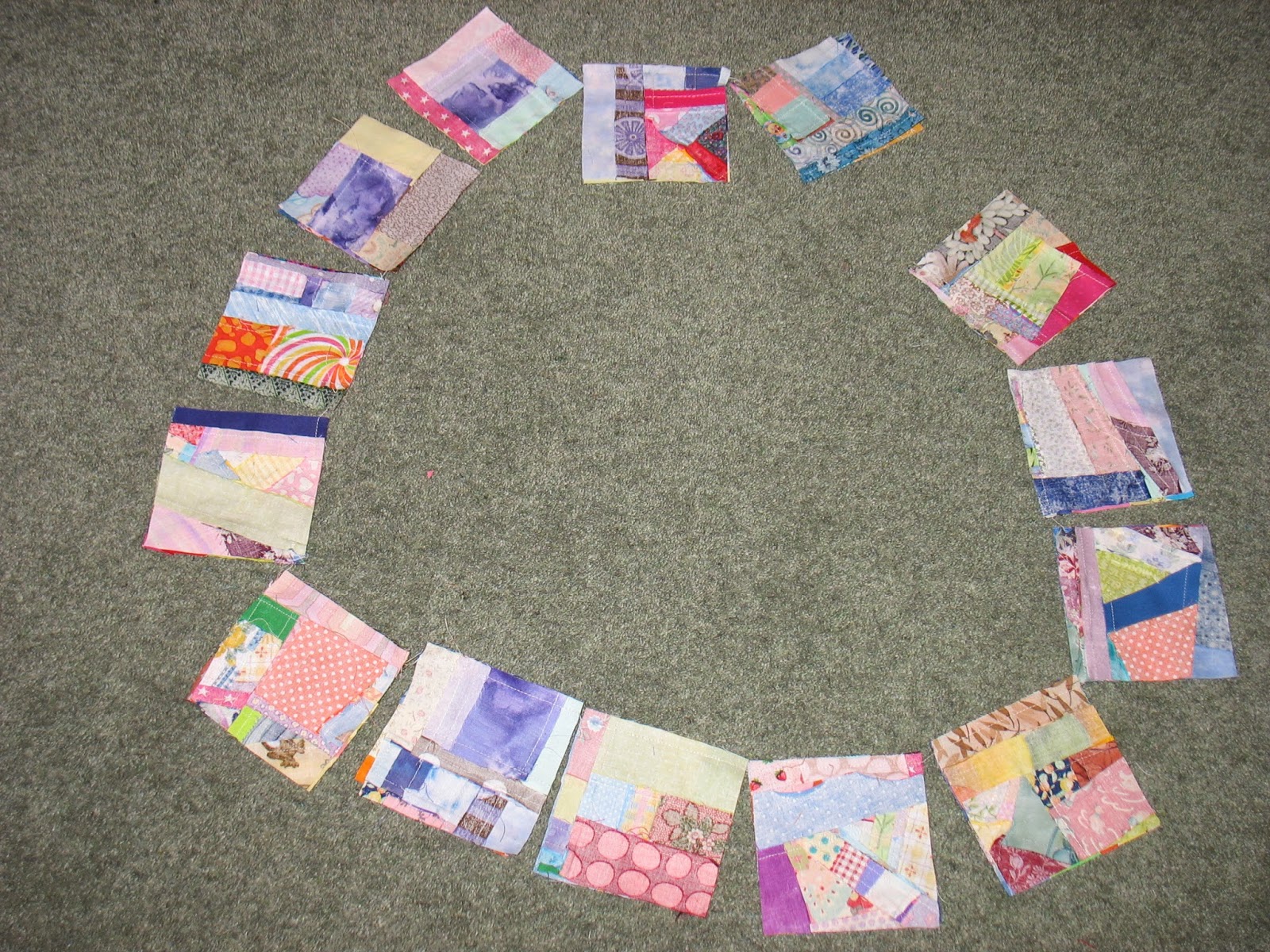 Then I snipped them into pairs of 2s, left them 'webbed' and easily put them together in a 4 patch block.  I did pin the centre but it really wasn't necessary as this webbing idea gets the blocks lined up beautifully.
Can you see the 'webbing"? It's the tiny thread holding together the pairs between the left hand side of the joined pairs. 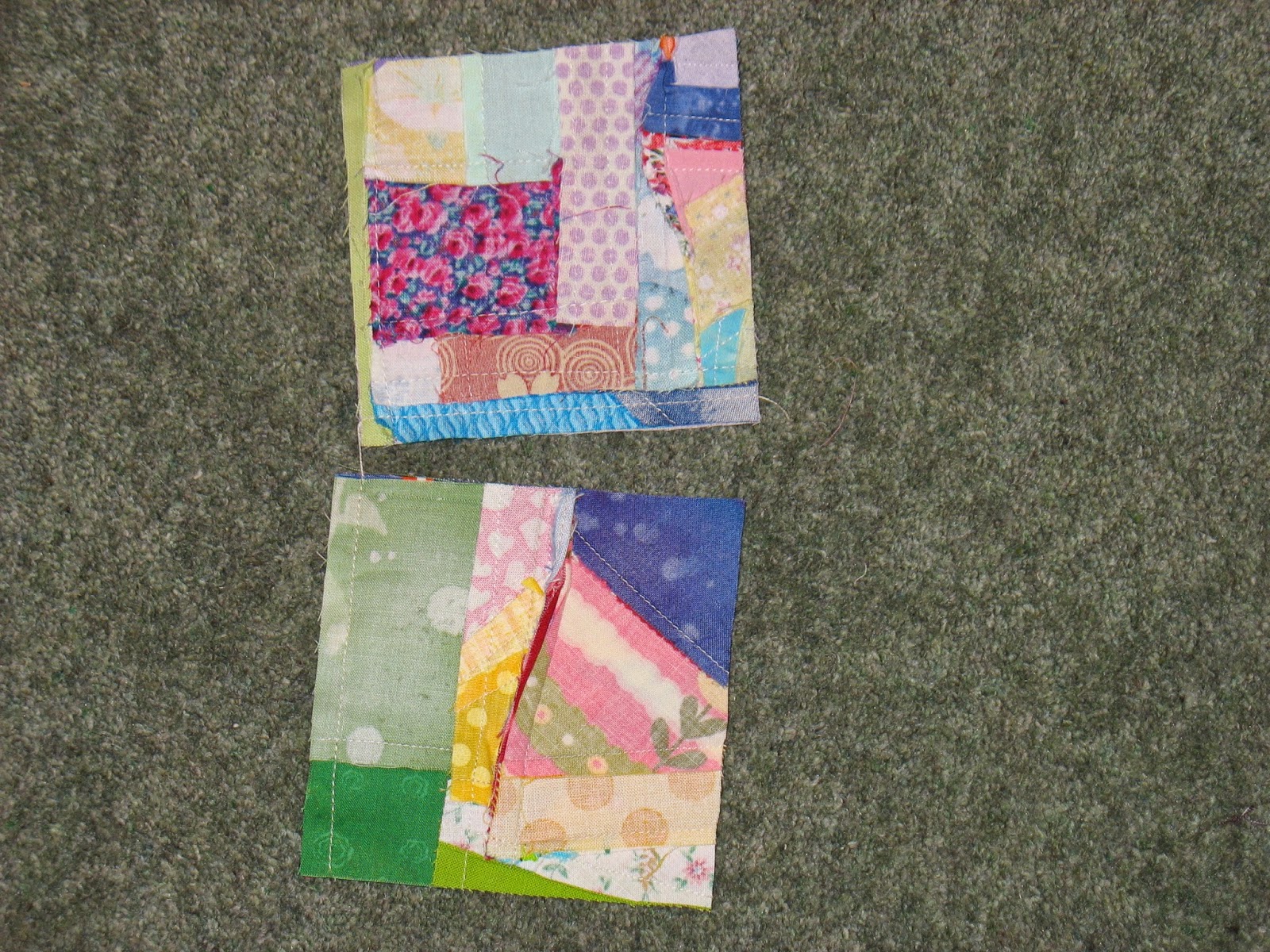 And here they are, all sewn and pressed, a really colourful bunch: 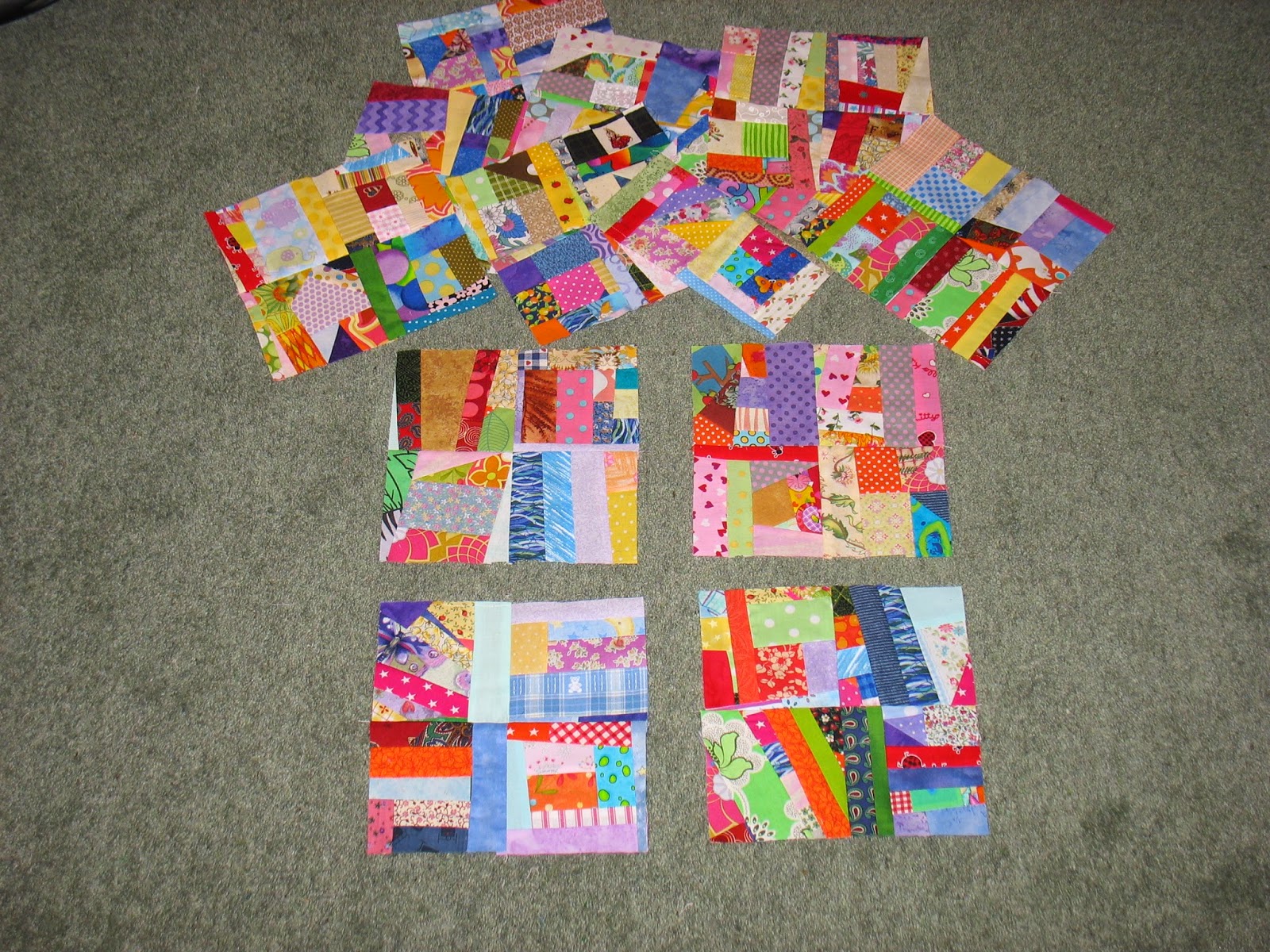 I am now finishing the sashing of the blocks to make another Cornerstones Quilt.
I am using a lilac Kona cotton and a couple of scraps which tone well with the lilac to make my 'cornerstones".  I am assembling this exactly as Gwen Marston shows in her book. But as my blocks are larger I have cut the sashing and cornerstones at 3" instead of 2.5".
The cutting didn't take long - even cut up the remaining cornerstone fabric scrap into some 3" squares and a strip for my Scraps Stash - and then chain pieced the sashing onto the blocks.
So far I have only completed one of the cornerstone-sashed blocks but I accomplished so much in a short time yesterday.
This is where I got to: 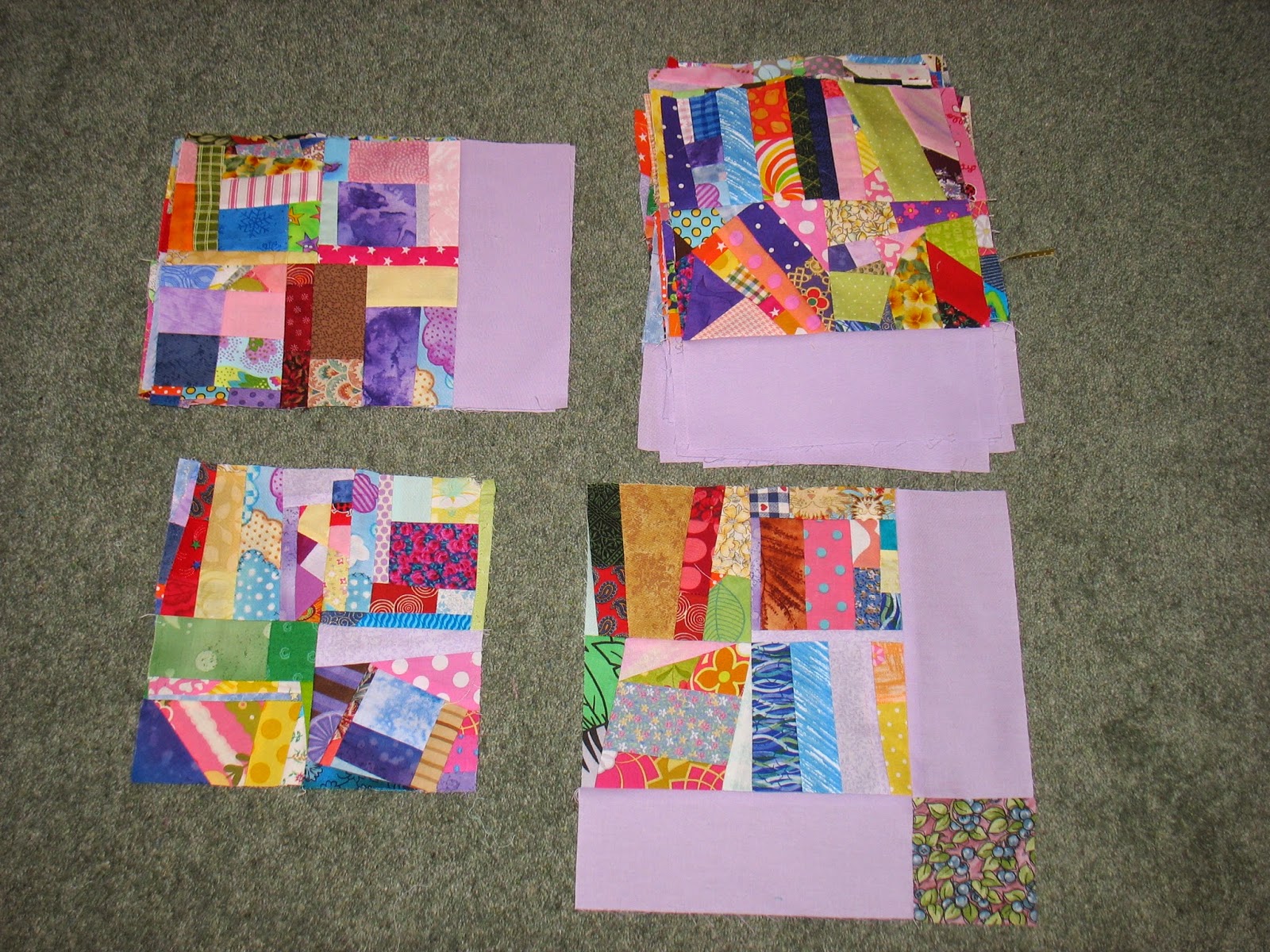 And that's where it stays at present.  I'm off to London with my husband for the weekend, setting off for the train station quite soon. We are going to a couple of exhibitions at the National Gallery and the Dulwich Gallery, plus a bit of shopping and sitting and reading in book shops!  Loads of walking of course, catching lots of tube trains where you walk miles along underground tunnels so my Fitbit will be working overtime.  I'm hoping to get some amazing totals on my weekly report next Tuesday!

Just finished two patchwork totes to hold the books of Bible stories I am giving as Christening presents to our neighbours' baby granddaughters, cousins Freya and Eadie who were born only a month apart. 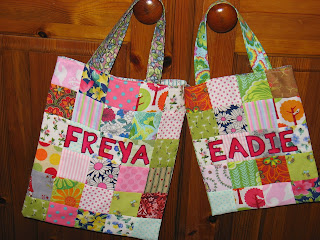 And with the books that will be popped inside the bags: 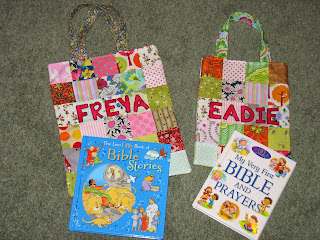 When I bought the two books I wanted to get a different one for each baby, I didn't think about their dimensions being slightly different.  The blue book wouldn't fit into the same sized tote as the other book, so I had to make Freya's bag larger.  Hope their Mums don't think that's odd!
The photos were taken on a dismal grey day and the colours of the patchwork are not as bright as they are in real life.  However, they are ready for the Christening at the end of the month.
Posted by Linda at 06:42 1 comment:

At last, I've made some Wonky Wishes blocks

Earlier in the year I made a few Wonky Wishes blocks as QAYG blocks for the Soy Amado Project.
I had seen them originally on Bonnie Hunter's blog (her pattern) and had watched her making them on one of her QuiltCams.

They really sang to me, hence the QAYG versions for Alison's project.

Since then I have been adding to my stash of 2.5" squares although I regularly deplete them by making patchwork totes for little girls!

Finally, yesterday I put a few Wonky Wishes blocks together.  They are intended for a 'boy' quilt, so I eliminated any 2.5" squares which included pink or mauve/purple. That immediately made a dent in the stash which says a lot about the colours I favour!

I love using scraps and find Bonnie's ideas so stimulating. Of course I also love stars!  I thought I had quite a mix of fabrics but found that really wasn't the case and struggled to get enough contrast and variety in the blocks.  So far I have completed these: 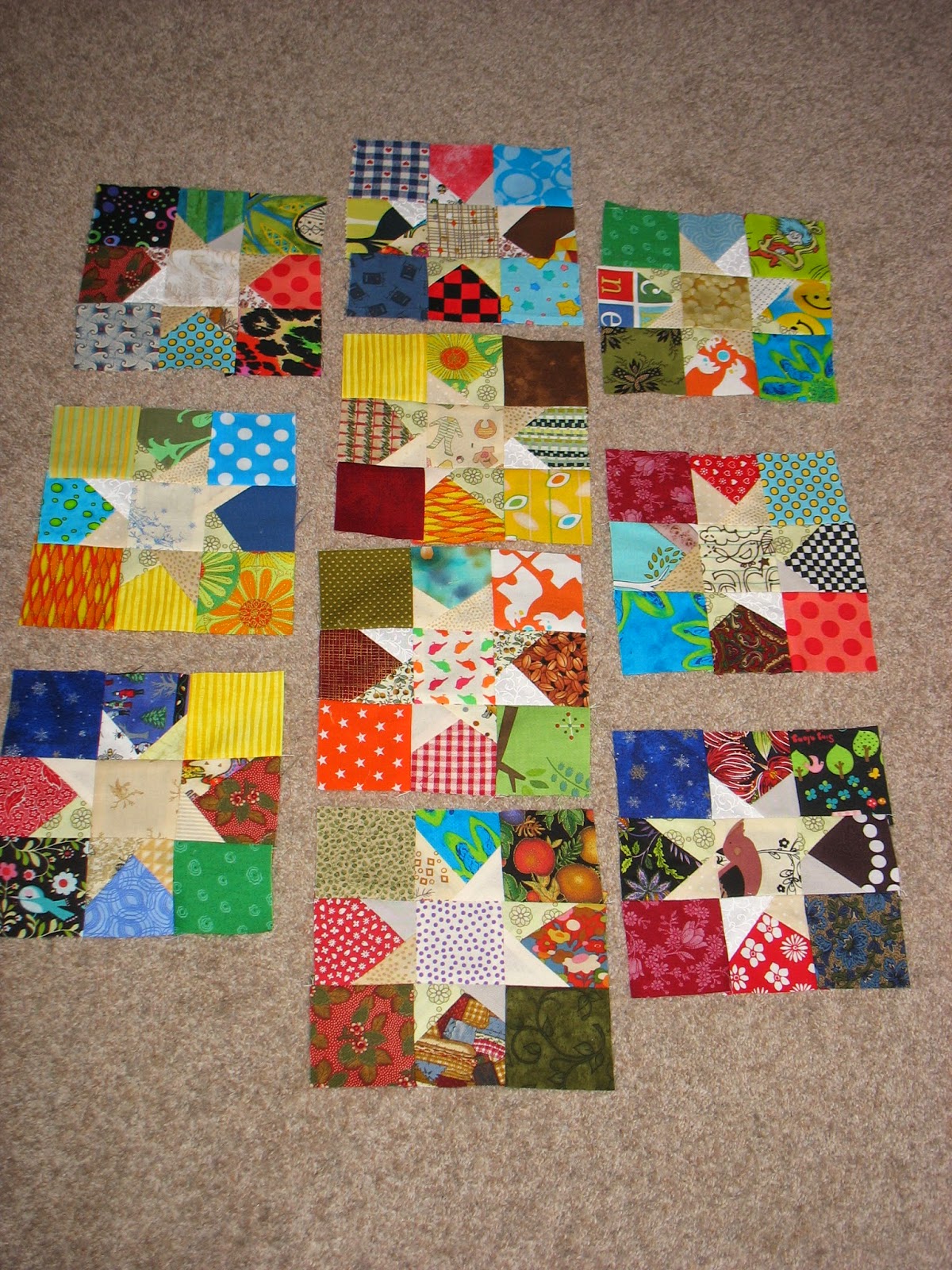 As long as you have a large supply of 2.5" squares, including a pile of neutrals for the centres and loads of small neutral scraps you an make these blocks very quickly, in a chain pattern, revolving two blocks at a time as Bonnie suggests.  I also used her 'webbing idea' which was new to me but easy to do, efficient to make as it eliminates the need to pin the rows together.

I took some photos of a block to show the method: 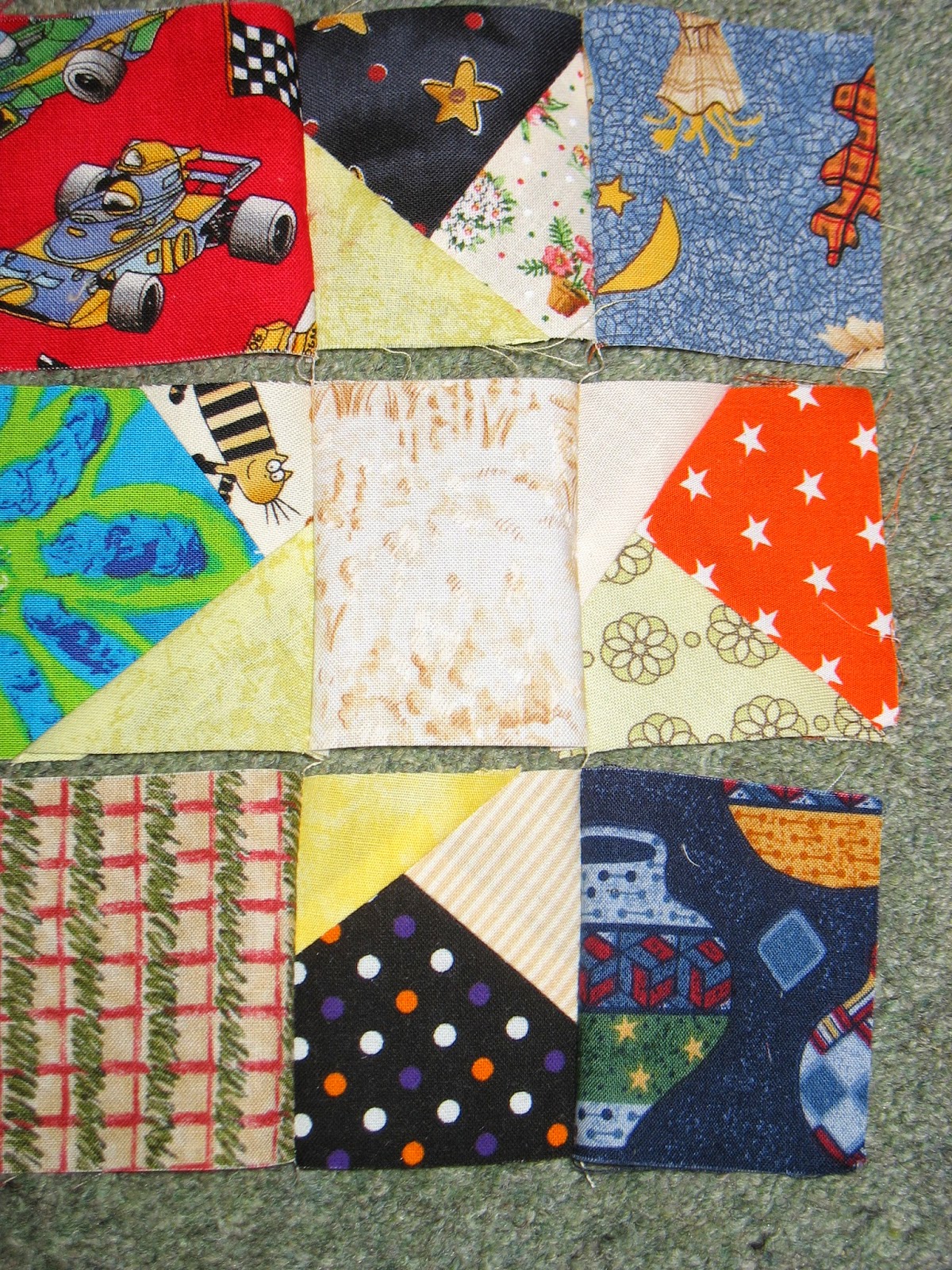 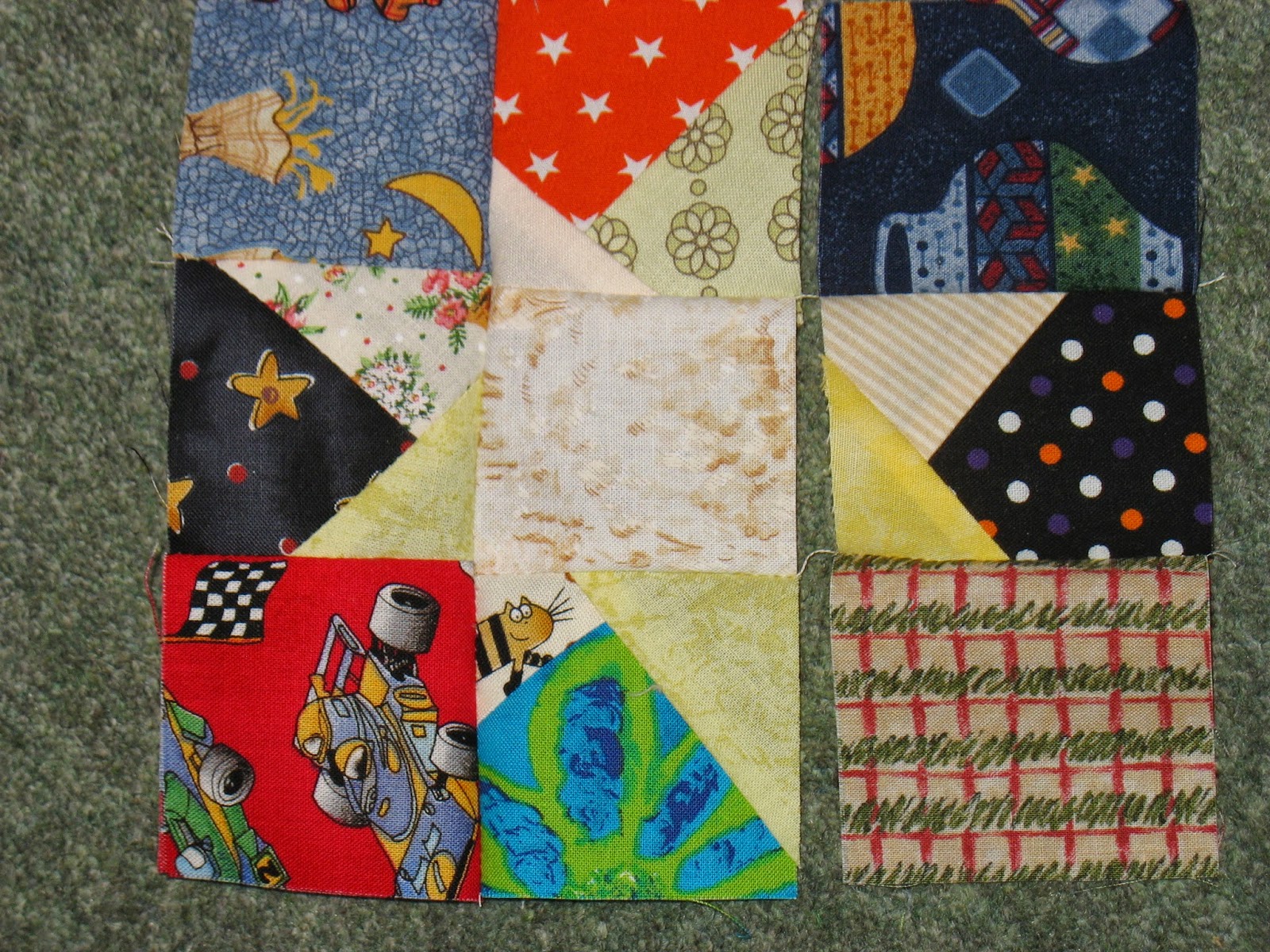 Each of these blocks is actually a quarter of the finished block as you put 4 together to make a Wonky Wishes  block measuring 12.5" so I have a lot more to make. However this is an on-going project so when I run out of interesting and varied 2.5" squares I'll put it aside for a while until I build up my stash again.  Good fun though. I can recommend the block and the method Bonnie shows on her blog.  It's under her "Free patterns" tab.

As I said I cut, stash and use 2.5" scrap squares all the time and my stash is taking a hammering at present!

My lovely little granddaughter is forever at birthday parties so I suggested to my daughter that I could make patchwork totes for gifts, with the birthday girl's name appliqued on the front ( as long as the name was 4 or 5 letters long).  So I have made quite a few!
The latest is for Emily - birthday coming up soon I believe: 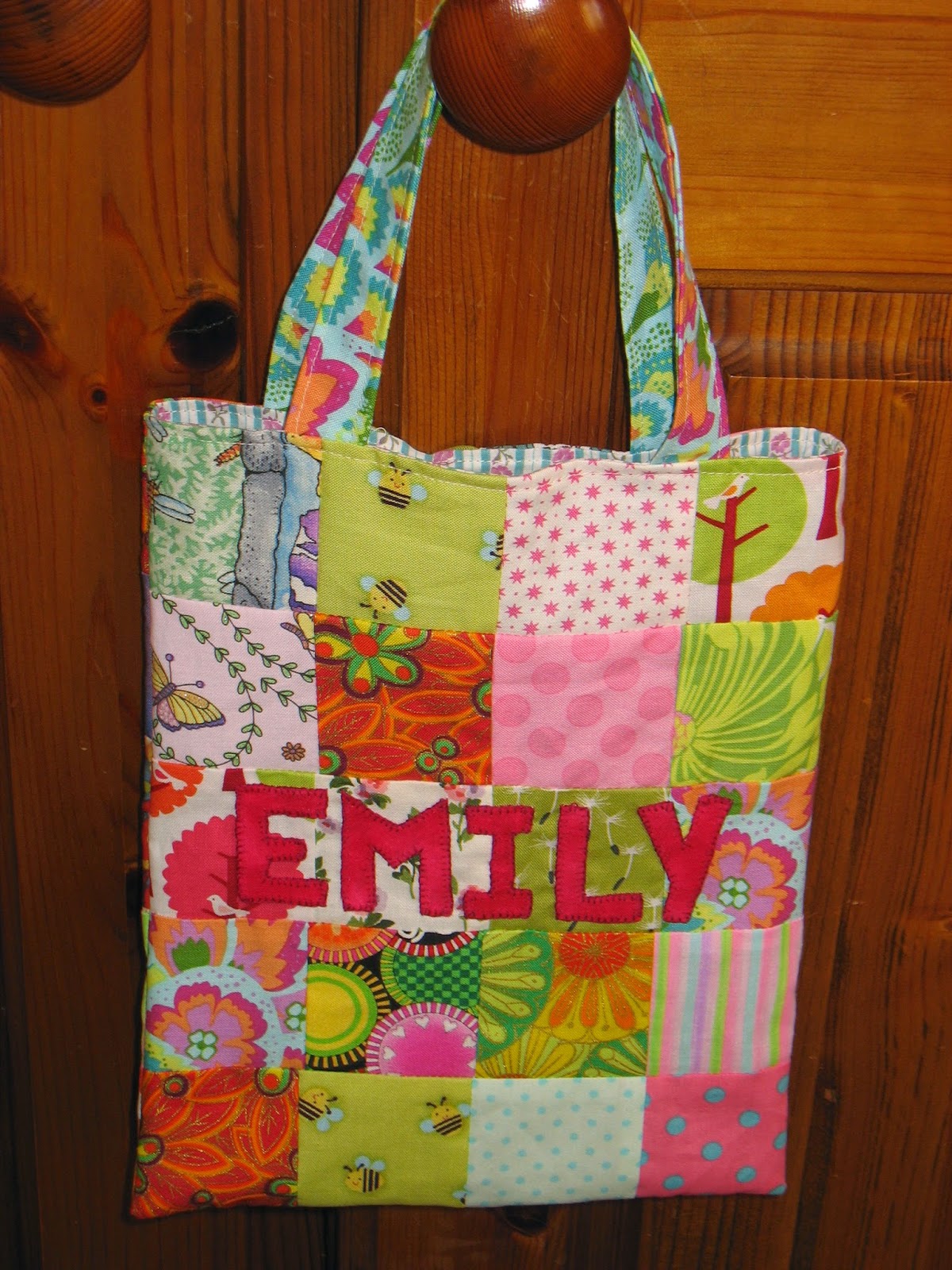 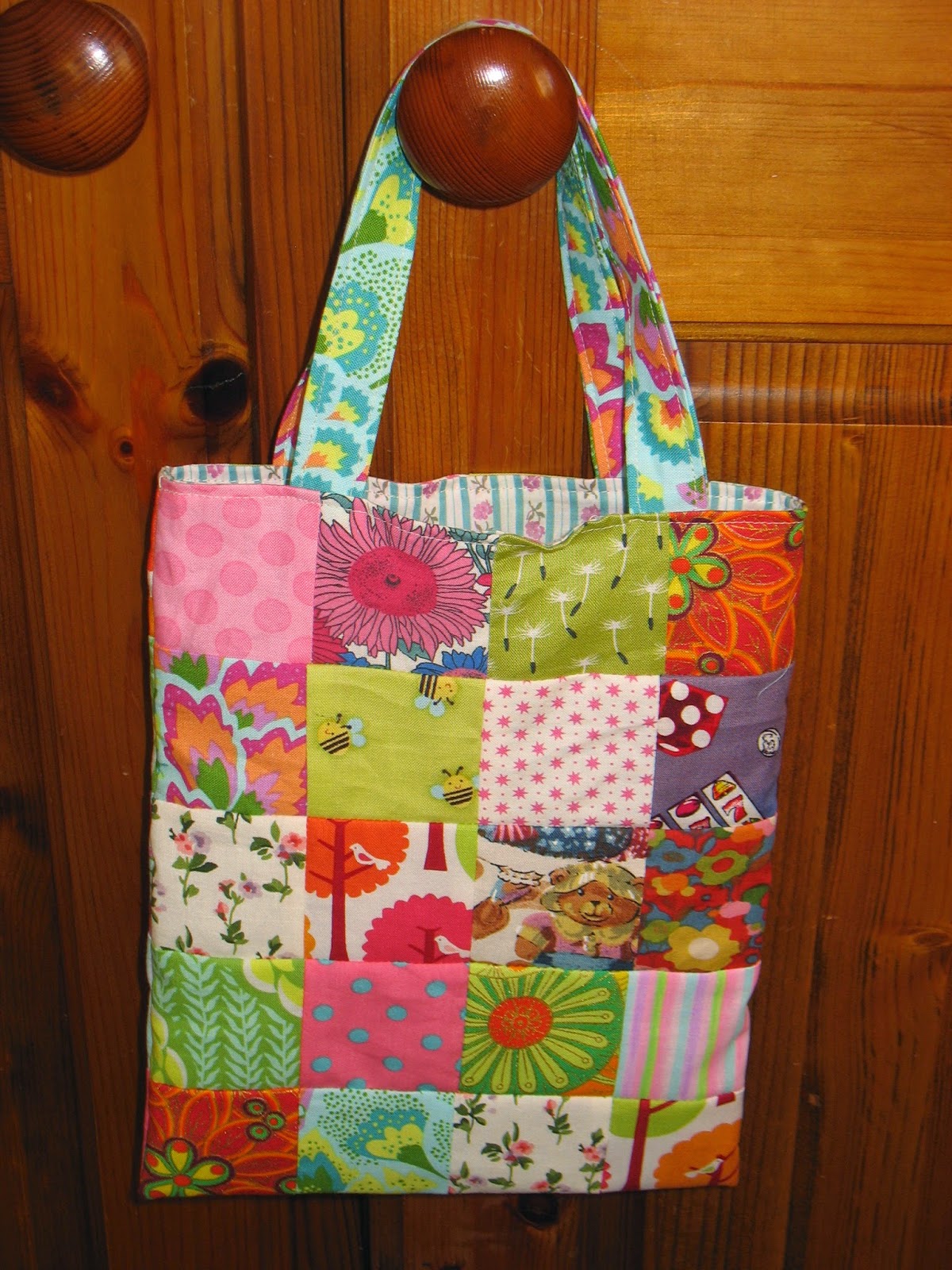 Having a variety of squares already cut makes these projects so quick to make.

So another happy time sewing and a few more scraps used up!  I so enjoy using every last bit of fabric!