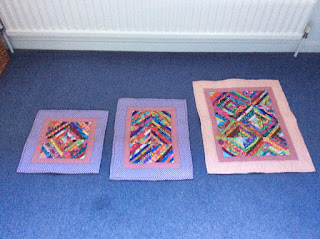 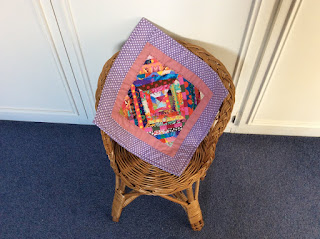 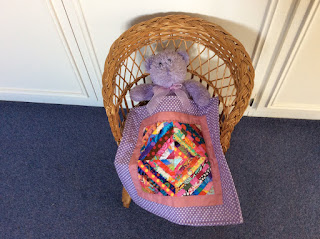 I used all those vibrant gifted 0.75" strings to make 20 x 4" String blocks.
I used many of them to make 3 small String Quilts.
One measuring 14" square which is intended for the lilac teddy which is going into my Christmas 2018 Shoebox Appeal.
The second one measures 14" x 18.5" which I'll give to our local hospital's Premature Baby Unit.
The third measuring 18.5" x 23" which will be gifted to 2 year old Libby when her expected baby brother/sister arrives towards the end of January.
And I still have a few left which I will probably include in Sunshine Quilt blocks.
Oh I do enjoy using scraps!
Posted by Linda at 06:57 3 comments: 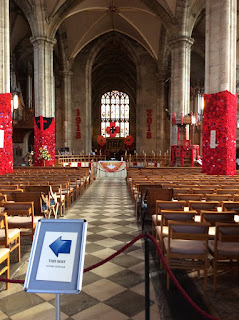 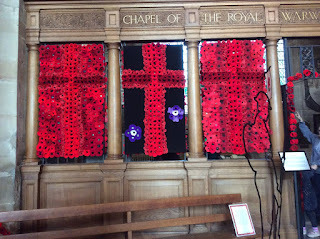 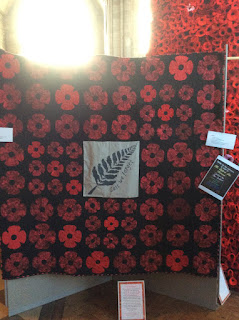 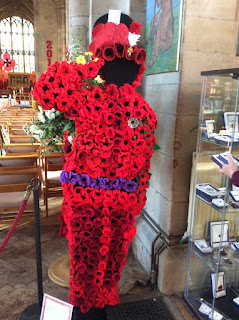 Yesterday my husband and I visited the most wonderful Exhibition of Poppies commemorating the end of WW1 which is being held at St Mary's Church, Warwick. Over 11,000 Warwickshire men were killed in the dreadful war and a couple of years ago 4 couples from St Mary's suggested to the  vicar that the men should be remembered and  hounoured for Remembrance Day 2018. They put out articles, messages through Facebook, contacted local organisations etc and the word spread far and wide. Knitted, crocheted, crafted poppies were sent in from all over the world, including South
Africa and Australia. 80 poppies were sent from Warwick in Queensland, Australia as apparently the town was named after people from Warwick UK who went to Queensland to settle. The original idea was to create an exhibition containing the same number of poppies as there were Warwickshire lives lost. When the exhibition was put up a week or so ago the team counted over 60, 000 poppies! We managed to speak to one of the ladies who was one of the eight who had the idea and she said everyday more and more poppies were arriving. She was holding three beautifully made poppies with leaves attached which had just be handed to her. The work involved in making the  poppies, the unbelievable effort made to create the displays is mind blowing. There is a whole section of work done by children, schools, Brownies, Cubs etc.
Displays featuring poems are also included, some I knew like "Do not stand at my grave and weep" and a most moving poem (new to me) called "Naming the parts" by Henry Reed. This was actually written in WW2 in 1942 but is very apt for this exhibition. If you live near or can visit Warwick I can't recommend this marvellous Exhibition enough. We will certainly go again. The length of time the Exhibition is being held has been extend until after Christmas. Thank goodness, after the mammoth task of putting it all together!

I never cease to be amazed at the ideas people have and their expertise in putting them into practice.

But above all I am humbled by the loss of life caused by this war. How can we ever thank those men for laying down their lives?

Sailing By, a finished baby quilt 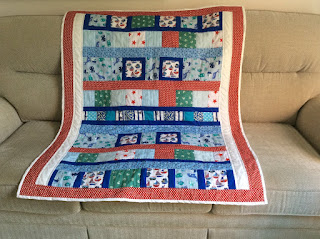 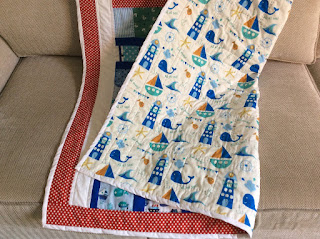 I am making a few baby quilts for babies due in December and January.
This is the first for a pair of boy twins due to be born in The Netherlands in December.
Most of the fabrics came from stash including the lovely seaside themed backing which I bought last year at The Festival of Quilts in Birmingham. I bought a pack of 4" squares mainly for the little boats and also the under the sea fabric was bought especially for this quilt so I could create a Nautical themed quilt. The Dutch have always been known for their sailing abilities so I thought it was apt.
The finished quilt measures 48" x 38".
Posted by Linda at 05:19 2 comments:

The Magic of Leftovers 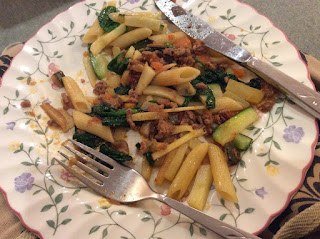 When I am sewing I love to use every scrap of fabric and when I'm cooking I like to make use of those food leftovers.
Last night's dinner was one of those Magic Leftovers meals.

A couple of days ago I cooked up a batch of beef mince as our granddaughter was eating with us. She doesn't like spiced food so I kept one portion separate for her and added diced courgettes and chilli flakes to the rest. Served with pasta tubes and of course I cooked far too much pasta. We had two meals from that and I had a portion of mince and cooked pasta left over. So last night I stir fried thin strips of courgette and parsnip in olive oil, added salt, pepper and a sprinkling of cumin. When the veggies had begun to soften I added the cooked pasta, stirring all the time until the pasta was reheated, then added lots of baby spinach, again stirring until the spinach had wilted slightly. Whilst this was happening I reheated the mince and the result was a really delicious meal.

Don't usually take photos of food but did last night as a reminder for myself. I'll certainly make this again - my husband would be happy to have it again this evening!

Isn't it great to use up those leftovers straight away?
Posted by Linda at 00:20 4 comments: 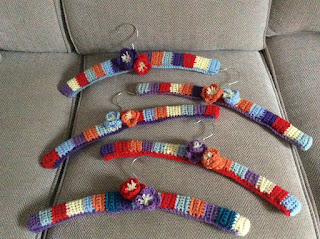 I love reading the blog called Attic24 and recently saw some crochet covered coat hangers she had made.
Of courseI had to try making some, sent off for a set of 10 coat hangers from Amazon and have now made 5 to give as little presents.

I didn't add the green leaves that were in the tutorial as my crocheting skills aren't too great but I love them with just the flowers.

I gifted one today as part of a birthday gift to one of my Patchwork friends. She loves doing crochet projects herself so I hope she likes her new coat hanger.
Posted by Linda at 05:53 3 comments: