I make 4" Crumb blocks as Leaders and Enders.  They have been steadily building up in a tin for a while so I decided it was time to use them. I decided on making a 4 patch block and using white 100% Egyptian cotton as sashing with pretty flowered 2.5" cornerstones.  All from stash.  The Egyptian cotton is from a bundle I bought at the Festival of Quilts last year. Each bundle consists of pieces of white cotton, very long 6/7" strips or quite large pieces which I assume are off cuts from making bed linens.  Beautiful quality.

I started making the blocks a couple of weeks ago at my Patchwork Group but yesterday I really got stuck in and completed the top apart from the final border which I have done this afternoon. Although I had a tin full of Crumb blocks I still had to make an extra six to have enough to make 25 blocks.
The top finishes at 52" which will be a good size for a Siblings Together quilt. 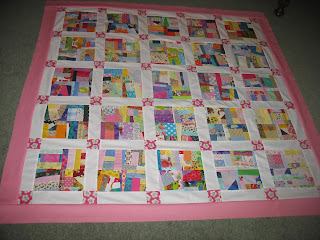 Close up showing the sashing and cornerstones 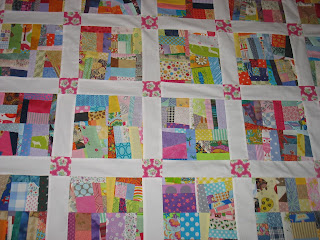 I have seen a couple of ideas using 4 patch units made from 1.5" squares so made a few as Leaders and Enders as I constructed the quilt top. 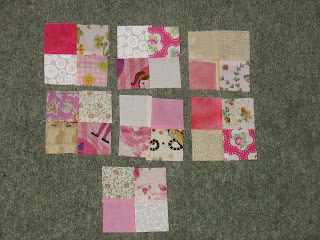 Here's a lovely small scrappy pink star I discovered yesterday, hidden away amongst my Crumb blocks. I knew I had acquired it in a Swap and went through my Flickr page to find out its origin.  From Valerie in Canada, sent as a little extra in a Block swap I participated in back in February 2012!
As it's Pink month for Angela's So Scrappy RSC 2017 I thought I should include it. Really beautifully made. 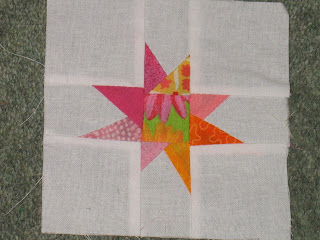 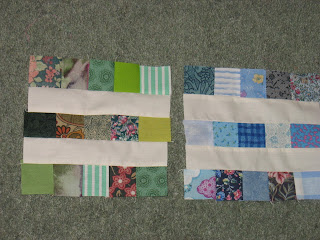 So a profitable weekend's sewing.  I have had a dreadful cold since Tuesday evening and spent a lot of time in bed feeling rotten but yesterday I really felt like sewing and it was great medicine!
Linking up with So Scrappy RSC 2017

64 squares sounds a lot, doesn't?  Not when you are talking about tiny 1.5" squares, especially when one block needs 49 of those 64!

So, Linking up with Angela's So Scrappy RSC blog to show you these 2 blocks: 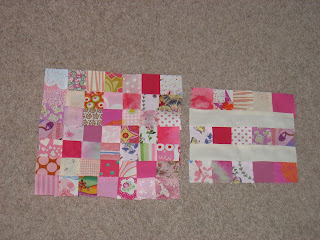 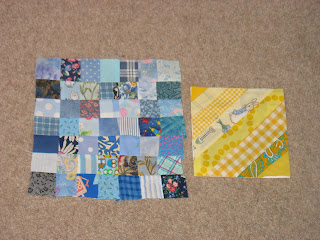 RSC: Making a start on pink

Not much time for sewing at the moment but I did manage to make 4 Roman Stripe blocks yesterday afternoon. I had a pile of 1.5" pink squares already stacked together in my tin and a set of cream strips cut to the correct size.  So handy to have them ready for the odd few minutes of sewing time. 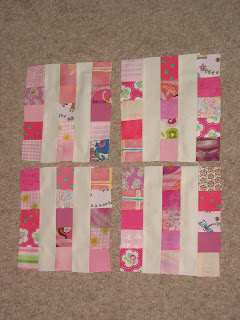 Linking up to Angela's So Scrappy Blog.
Posted by Linda at 04:09 9 comments:

Yesterday I finished the 6 Soy Amado blocks I have been making for Alison at littleislandquilting.blogspot.co.uk

Four made from gifted log cabins which I have enlarged to make the required 12.5" square finished blocks: 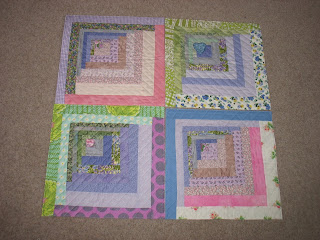 And 2 made from orphan blocks: 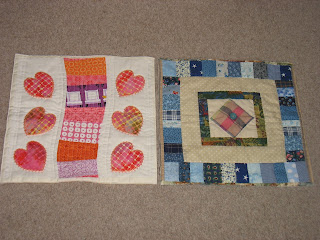 The first block with the appliqued hearts was a block leftover from a quilt I made last year for Siblings Together. I had to add a little extra cream fabric so that the blocks would be large enough and I experimented with some matchstick machine quilting down the centre panel. I echo hand quilted around the hearts with a variegated pink Perle thread.

The blue and cream block began with the centre square block.  I added extra borders, medallion style, hand quilted in the ditch and sewed a deep turquoise button in the centre.