Now that I have finally surfaced from over a week in bed dealing with a heavy cold which got worse and worse and worse - thank heavens for antibiotics, I say! - I can finally write a post about the three QAYG blocks I made for Alison's on going project, Soy Amado Quilts

I have made a couple of lots of QAYG blocks for Alison in the past and thoroughly enjoyed making them.  I am full of admiration for Alison because she continues to make these quilts for a great cause: they are sent to a children's home in Mexico where every bed has one of her colourful quilts to cheer up the rather utilitarian surroundings. I am sure the children must be delighted as each quilt is completely different.  Have a look at Alison's blog: littleislandquilting.blogspot.co.uk
and her Flickr Group page: Soy Amado - quilted blocks for charity

As I finished the group quilt top and looked through stash for suitable squares for making lavender bags I thought I would take the opportunity to use up some orphan blocks and scraps to make a few blocks for Soy Amado. 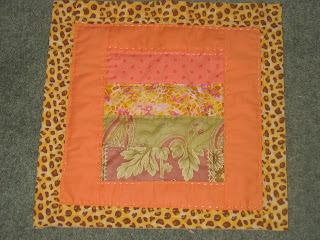 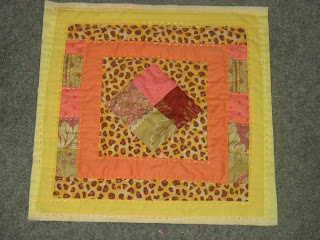 I surrounded the centres with scraps found from stash and the leopard print FQ I also  found in my stash.
When I made the lavender bags I discovered a bag of 3.875" squares and striped blocks I had used to make a Pinwheel Quilt for my sister - back in April 2010!
I used the 4 striped orphan blocks to make the centre, halved the squares and joined to make borders and created this QAYG block: 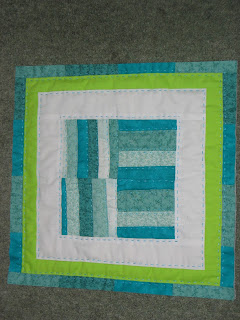 Two of the blocks had pieced backings, again using scraps and the rest of the leopard print FQ whilst the third used a leftover piece of fabric which has lingered in my scraps stash for several years. 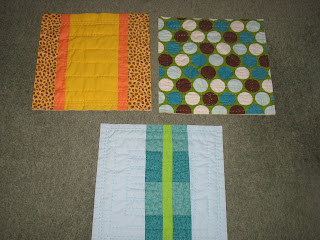 All three were hand quilted using Perle thread - a process I so enjoy.
They have been waiting patiently for me to get better, so now I hope to get them mailed in the next couple of days.