A couple of years ago one of my Patchwork friends had a clear-out prior to downsizing her home.  I picked up a few unwanted scraps including a Printed Scarecrow which had already been roughly cut out.
At the time I thought I could turn it into an appliqued Child's cushion.
And there it languished in a drawer all forgotten and unloved until I found it again a couple of months ago.  It was then moved near my sewing table and stayed there for a while!.........................
Until yesterday afternoon.

The idea of a cushion no longer appealed but I had a brainwave.  How about doing some applique, using a fusible webbing to attach the scarecrow to a backing and create the centre for a Medallion quilt?
So, after searching amongst my smaller pieces I found a wheat-coloured striped fabric, very like a field where Mr Scarecrow could stand. 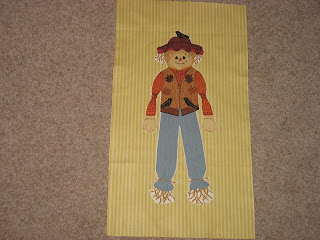 Last year I made a Medallion Quilt for Siblings Together, using Gwen Marston's great book called
Liberated Medallion Quilts.
So, border by border I am going to see how this quilt develops.  The first border is going to be a narrow one, from a navy blue fabric I have already picked out from my stash. but before this I have to hand blanket stitch around Mr Scarecrow.  May do that tonight when I catch up on a couple of TV programmes I've recorded.