What a wonderful day I had yesterday!

Two very dear quilting friends and I travelled up to York by train. Almost 3 hour journey on the way up, a little less on the way home. Both journeys very easy and pleasant and passed quickly as we chatted to each other and read.

I hadn't been to York for some years so it was lovely to be walking along such old streets (some pavements are still cobbled), looking at interesting shops, finding places to eat lunch and have tea before we came home.

El Piano was a most eclectic restaurant suggested by the lady in the Information Office. On the way we discovered a great shop Maude and Tommy which we returned to after our Exhibition trip.
All the food in El Piano was vegetarian which all three of us enjoy and we were not disappointed! I had a lovely veggie burger with a deliciously spicy tomato and coriander salad, couscous and "mathematical chips - square roots" which turned out to be square cut roasted potatoes in their skins with chunks of baked carrot.  All quite delicious, reasonably priced and a good sized portion - I couldn't finish it all.

Then re-fuelled, off we went to find The Quilters' Guild  QUILT MUSEUM AND GALLERY  housed in the delightful medieval St Anthony's Hall. I had seen pictures of the hall in the Quilter's Guild magazine but hadn't realised the beamed domed gallery was on the first floor.

Kaffe Fassett, Patron of the Quilters' Guild had worked with the Gallery, exploring their historic collection of quilts. He chose 15 quilts, dating from 1790 - 1940 which called out to him for various reasons and then used each quilt as inspiration for his modern 'take", using his own beautiful brightly coloured fabrics to create 15 new quilts.

The result is superb! beautifully hung in this lofty gallery, each new quilt beside or hung across or above the original quilt which Kaffe had used as his inspiration.  As a longtime Kaffe Fassett fan the exhibition just sang to me.

Photographs were very generously allowed as long as flash was not used.  this presented a difficulty for me as I didn't know how to turn off the flash.  One of the attendants helped me, managed to trick the camera for a couple of shots and then the wretched automatic flash returned.  A phone call to my husband who initially couldn't remember what to do, then he rang me back with an idea. it worked but it was almost closing time so a few very hurried snaps were taken!

So, a few photos to give you an idea of what we saw: 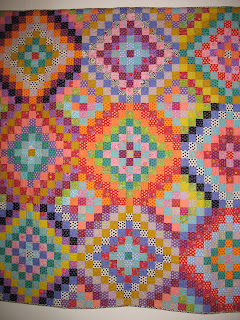 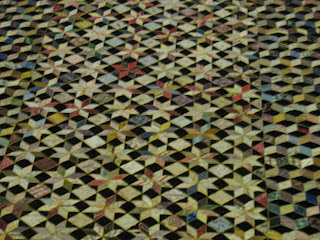 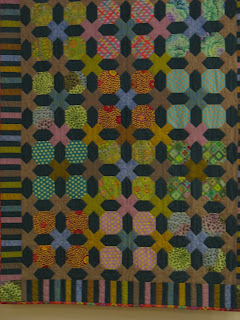 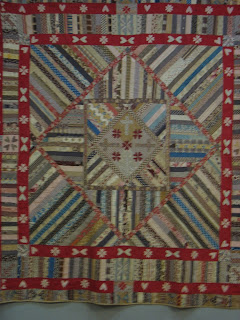 Help!  Running out of time. Have to get going to my Patchwork Group meeting.  Will come back later today with the rest of my post about this wonderful exhibition.
Posted by Linda at 01:49